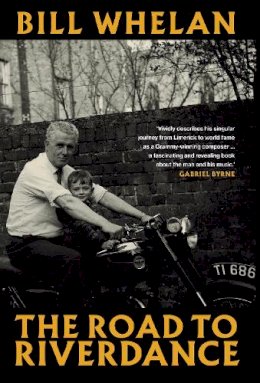 The Road to Riverdance

Description for The Road to Riverdance Paperback.
Riverdance exploded across the stage at Dublin's Point Theatre one spring evening in 1994 during a seven-minute interval of the Eurovision Song Contest hosted by Ireland. It was a watershed moment in the cultural history of a country embracing the future, a confident leap into world music grounded in the footfall of the choreographed kick-line. It was a moment forty-five years in the making for its composer. In this tenderly unfurled memoir Bill Whelan rehearses a lifetime of unconscious preparation as step by step he revisits his past, from with his Barrington Street ... Read morehome in 1950s Limerick, to the forcing ground of University College Dublin and the Law Library during the 1960s, to his attic studio in Ranelagh. Along the way the reader is introduced to people and places in the immersive world of fellow musicians, artists and producers, friends and collaborators, embracing the spectrum of Irish music as it broke boundaries, entering the global slipstream of the 1980s and 1990s. As art and commerce fused, dramas and contending personalities come to view behind the arras of stage, screen and recording desk. Whelan pays tribute to a parade of those who formed his world. He describes the warmth and sustenance of his Limerick childhood, his parents and Denise Quinn, won through assiduous courtship; the McCourts and Jesuit fathers of his early days, the breakthrough with a tempestuous Richard Harris who summoned him to London; Danny Doyle, Shay Healy, Dickie Rock, Planxty, The Dubliners and Stockton's Wing, Noel Pearson, Sean O Riada; working with Jimmy Webb, Leon Uris, The Corrs, Paul McGuinness, Moya Doherty, John McColgan, Jean Butler and Michael Flatley. Written with wry, inimitable Irish humour and insight, Bill Whelan's self deprecation allows us to to see the players in all their glory, vulnerability and idiosyncracy. This fascinating work reveals the nuts, bolts, sheer effort and serendipities that formed the road to Riverdance in his reinvention of the Irish tradition for a modern age. As the show went on to perform to millions worldwide, Whelan was honoured with a 1997 Grammy Award when Riverdance was named the 'Best Musical Show Album.' Richly detailed and illustrated, The Road to Riverdance forms an enduring repository of memory for all concerned with the performing arts. Show Less

About Bill Whelan
Bill Whelan's production and arranging credits include, among others, U2, Van Morrison and Kate Bush. He has also worked extensively in theatre. His adaptation of Gilbert and Sullivan's HMS Pinafore had successful runs at London's Old Vic, Melbourne and Sydney and received a Laurence Olivier Award nomination. In 1989, he was appointed composer to the W.B. Yeats International Theatre Festival ... Read moreat Dublin's Abbey Theatre, he wrote original music for 15 Yeats's plays. He has also composed scores for films including Lamb starring Liam Neeson and Dancing At Lughnasa starring Meryl Streep. His most famous work, Riverdance, was composed especially for the interval act of the 1994 Eurovision Song Contest. As a single release, Riverdance spent 18 weeks at No. 1 in the Irish charts and was a Top Ten hit in the UK. Since then it has gone on to play to millions of people world-wide with both the album and video topping the charts around the world. Bill was honoured with a 1997 Grammy Award when the Riverdance record was named the 'Best Musical Show Album'. Show Less

Reviews for The Road to Riverdance
HOT PRESS BOOK OF THE YEAR 'Bill Whelan's memoir is an entertaining account of the seismic changes in Irish society during the second half of the 20th century and a colourful testament to an extraordinary life that helped shape and soundtrack it.' Eamon Sweeney, Irish Times 'Tells the story of a life in music and the path that led to ... Read moreone of Ireland's most significant cultural exports.' Irish Independent 'Makes for marvellous, revealing and very powerful reading. A brilliant edition to the canon, it offers a remarkable picture of a musical life lived to the full. Hats off to its maker' Niall Stokes, Hot Press 'What an incredible talent he is' Marty Whelan 'Filled with Limerick humour' Limerick Leader 'Bill Whelan dances down memory lane with new memoir' Galway Advertiser 'Paints an unforgettable picture of how one man navigated the rapids of music in Ireland - and came up trumps in the long run ... an essential read for anyone who loves Irish music.' Hot Press 'From [Whelan's] central position involved in taking traditional Irish dance into a modern orbit of choreographed bliss, the book charts the artistic and business marriage that built the Riverdance machine - the nuts, bolts and good fortune that together conspired to fashion an extravaganza that would go on play to millions around the globe ... After twenty-seven years of live performances to over 22 million people, it remains an Irish export up there with the best.' Irish Examiner IRISH EXAMINER BEST BOOK Show Less

Goodreads reviews for The Road to Riverdance