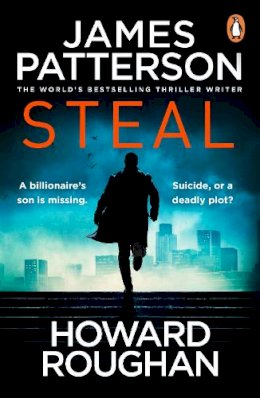 Will be shipped on or around publication date

Description for Steal Paperback. ***THIS IS A PREORDER TO BE SHIPPED ON OR AROUND THE PUBLICATION DATE IN DECEMBER 2022***
'James Patterson is The Boss. End of.' Ian Rankin 'One of the greatest storytellers of all time' Patricia Cornwell 'A writer with an unusual skill at thriller plotting.' Mark Lawson, Guardian __________________________________ The third thrilling instalment of James Patterson's Instinct series The stakes are sky-high for Dr Dylan Reinhart. When a student in Reinhart's psychology class threatens to kill himself, everyone hopes it's a hoax. But when he can't be found after twenty-four hours, it seems the worst is confirmed. Did he really do it? ... Read more The student's father, a powerful hedge fund CEO, is convinced he didn't. Only one person can help him get to the truth. Reinhart is now wrapped up in multimillion-dollar secrets and danger and it's going to take every bit of his expertise to close the case. Can he stay ahead of his enemy . . . and his employer? _________________________________ Praise for James Patterson 'The master storyteller of our times' Hillary Rodham Clinton 'No one gets this big without amazing natural storytelling talent - which is what Jim has, in spades.' Lee Child 'It's no mystery why James Patterson is the world's most popular thriller writer . . . Simply put: nobody does it better.' Jeffery Deaver 'Patterson boils a scene down to the single, telling detail, the element that defines a character or moves a plot along. It's what fires off the movie projector in the reader's mind.' Michael Connelly Show Less

About James Patterson
JAMES PATTERSON is one of the best-known and biggest-selling writers of all time. His books have sold in excess of 400 million copies worldwide. He is the author of some of the most popular series of the past two decades - the Alex Cross, Women's Murder Club, Detective Michael Bennett and Private novels - and he has written many other ... Read morenumber one bestsellers including stand-alone thrillers and non-fiction. James is passionate about encouraging children to read. Inspired by his own son who was a reluctant reader, he also writes a range of books for young readers including the Middle School, Dog Diaries, Treasure Hunters and Max Einstein series. James has donated millions in grants to independent bookshops and has been the most borrowed author in UK libraries for the past thirteen years in a row. He lives in Florida with his family. Show Less