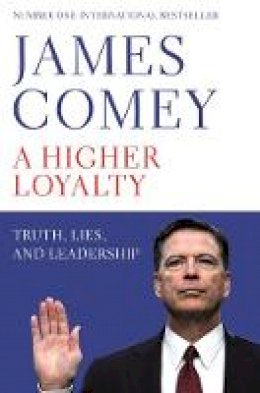 Description for A Higher Loyalty: Truth, Lies, and Leadership Paperback.
The inspiration for The Comey Rule, the Showtime limited series starring Jeff Daniels premiering September 2020 The sensational Sunday Times #1 Bestseller about taking on the mafia, the Clintons and Trump. 'An urgent clarion call.' - The Financial Times In A Higher Loyalty, his massive Number One bestselling memoir, former FBI director James Comey shares his never-before-told experiences from some of the highest-stakes situations of his career in the past two decades of American government, exploring what good, ethical leadership looks like, and how it drives sound decisions. His journey provides ... Read morean unprecedented entry into the corridors of power, and a remarkable lesson in what makes an effective leader. Mr. Comey served as director of the FBI from 2013 to 2017, appointed to the post by President Barack Obama. He previously served as U.S. attorney for the Southern District of New York, and the U.S. deputy attorney general in the administration of President George W. Bush. From prosecuting the Mafia and Martha Stewart to helping change the Bush administration's policies on torture and electronic surveillance, overseeing the Hillary Clinton e-mail investigation as well as ties between the Trump campaign and Russia, Comey has been involved in some of the most consequential cases and policies of recent history. Show Less

About James Comey
On September 4, 2013, James Comey was sworn in as the seventh Director of the FBI. A Yonkers, New York native, Jim Comey attended the College of William and Mary and the University of Chicago Law School. After law school, Comey returned to New York and joined the U.S. Attorney's Office for the Southern District of ... Read moreNew York as an Assistant U.S. Attorney. There, he took on numerous crimes, most notably Organized Crime in the case of the United States v. John Gambino, et al. Afterwards, Comey became an Assistant U.S. Attorney in the Eastern District of Virginia, where he prosecuted the high-profile case that followed the 1996 terrorist attack on the U.S. military's Khobar Towers in Khobar, Saudi Arabia. Comey returned to New York after 9/11 to become the U.S. Attorney for the Southern District of New York. At the end of 2003, he was tapped to be the Deputy Attorney General at the Department of Justice (DOJ) under then-U.S. Attorney General John Ashcroft and moved to the Washington, D.C. area. Comey left DOJ in 2005 to serve as General Counsel and Senior Vice President at Defense contractor Lockheed Martin. Five years later, he joined Bridgewater Associates, a Connecticut-based investment fund, as its General Counsel. In early 2013, Comey became a Lecturer in Law, a Senior Research Scholar, and Hertog Fellow in National Security Law at Columbia Law School. Show Less

Reviews for A Higher Loyalty: Truth, Lies, and Leadership
A well-written memoir, which combines a powerful argument for principled leadership with some acid comment on Trump's mendacious ego driven alternative
The Economist
[Comey] deftly, sometimes comically, captures the president as the inattentive, emotionally stunted, self-focused, absent-from-any-civic-sense, absurd fellow almost anyone in contact with him knows him to be . . . it is a story of probity, ... Read morehonour and virtue . . . Comey is an Avenger
Sunday Times
Comey has quite a story to tell - and that's even before we get to the Clinton and Trump chapters that have made this book an instant bestseller
Jonathan Freedland
Guardian
Trump offends all that Comey claims to hold dear about power in America and the values and institutions which merit his loyalty. Trump has shot back, but Comey has landed a stinger
Evening Standard
An urgent clarion call.
The Financial Times
Show Less

Goodreads reviews for A Higher Loyalty: Truth, Lies, and Leadership