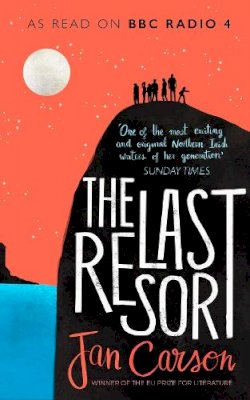 Description for The Last Resort Hardcover. Signed by the author
'Profoundly imagined characters, spiced with the off-kilter and deliciously mad . . . a work of great empathy and imagination' THE IRISH TIMES The season's just begun at Seacliff Caravan Park, but none of the residents are having a good time. Frankie is haunted by his daughter's death. Vidas, homeless and far from Lithuania, seeks sanctuary in an abandoned caravan. Anna struggles to shake off the ghost of her overbearing mother. Kathleen struggles to accept her daughter for who she is. Malcolm, a failed illusionist, makes one final attempt to reinvent ... Read morehimself. Agatha Christie-obsessed Alma faces her toughest case yet as she tries to help them all find what they've lost. With trademark wit and playfulness, in this stunning linked short-story collection Jan Carson explores complex family dynamics, ageing, immigration, gender politics, the decline of the Church and the legacy of the Troubles. The Last Resort firmly places Carson as one of the most inventive and daring writers of her generation. 'One of the most exciting and original Northern Irish writers of her generation' SUNDAY TIMES Show Less

About Jan Carson
Jan Carson is a writer and community arts facilitator based in Belfast. Her first novel, Malcolm Orange Disappears, was published in 2014 to critical acclaim, followed by a short-story collection, Children's Children (2016), and two flash fiction anthologies, Postcard Stories (2017) and Postcard Stories 2 (2020). Her second novel, The Fire Starters (2019), won the EU Prize for Literature and ... Read morewas shortlisted for the Dalkey Novel of the Year Award. Her work has appeared in numerous journals and on BBC Radio 3 and 4. She has won the Harper's Bazaar short-story competition and has been shortlisted for the BBC National Short Story Award and the Sean O Faolain Short Story Prize. She specializes in running arts projects and events with older people, especially those living with dementia. Show Less

Goodreads reviews for The Last Resort