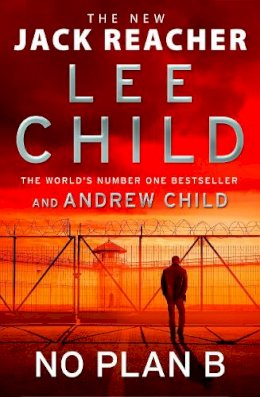 Description for No Plan B Paperback.
The gripping new Jack Reacher thriller from the No.1 bestselling authors Lee Child and Andrew Child. When your name is Jack Reacher, the truth is always worth doing time for. Gerrardsville, Colorado. One tragic event. Two witnesses. Two conflicting accounts. One witness sees a woman throw herself in front of a bus - clearly suicide. The other witness is Jack Reacher. And he sees what really happened - a man in grey hoodie and jeans, swift and silent as a shadow, pushing the victim to her death, before grabbing her bag and sauntering away. ... Read more Reacher follows the killer, not knowing that this was no random act of violence. It is part of something much bigger...a sinister, secret conspiracy, with powerful people on the take, enmeshed in an elaborate plot that leaves no room for error. If any step is compromised, the threat will have to be quickly and permanently removed. Because when the threat is Reacher, there is No Plan B... 'Perfectly plotted, with bigger twists than ever before' KARIN SLAUGHTER 'The world's favourite hero packs an even harder punch than ever' PETER JAMES Although the Jack Reacher novels can be read in any order, No Plan B is the 27th book in the internationally bestselling series. Show Less

About Child, Lee, Child, Andrew
Lee Child is one of the world's leading thriller writers. He was born in Coventry, raised in Birmingham, and now lives in New York. It is said one of his novels featuring his hero Jack Reacher is sold somewhere in the world every nine seconds. His books consistently achieve the number-one slot on bestseller lists around the world and ... Read morehave sold over one hundred million copies. Lee is the recipient of many awards, most recently Author of the Year at the 2019 British Book Awards. He was appointed CBE in the 2019 Queen's Birthday Honours. Andrew Child is the author of nine thrillers written under the name Andrew Grant. He is the younger brother of Lee Child. Born in Birmingham, he lives in Wyoming with his wife, the novelist Tasha Alexander. Show Less

Reviews for No Plan B
Lee and Andrew Child nail it again with NO PLAN B
Richard Osman
No Plan B is not to be missed. A perfectly plotted, fast paced thriller, with bigger twists than ever before. It's no wonder Jack Reacher is everyone's favourite rebel hero
Karin Slaughter
The world's favourite hero packs an even harder punch than ... Read moreever.
Peter James
Contains more chases than James Bond could manage, a plot to keep the reader guessing, and enough bad guys to test Reacher's strength and guile. . .Destined to be another bestseller.
i
Show Less

Goodreads reviews for No Plan B