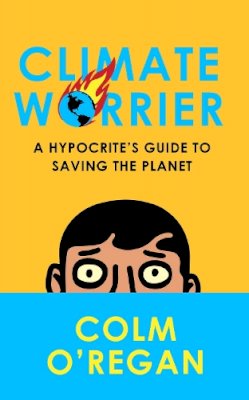 Climate Worrier: A Hypocrite’s Guide to Saving the Planet

Description for Climate Worrier: A Hypocrite’s Guide to Saving the Planet Hardcover. **Colm O’Regan grew up on a small farm where his family planted lots of trees and grew most of their own food, but his father – who took Dutch elm disease personally – also happened to burn rubbish out the back and loaded the soil with 10-10-20. Now a father himself, Colm O’Regan tries to do his bit by cycling and recycling, but he still ends up putting his foot in the mulch. Most of us would like to live more sustainable lives, but what’s the point in picking up litter if you have to commute 80km just to get to the office? Climate Worrier is a book full of hypocrisies – how in trying to do the right thing, there’s always someone who will point out that, actually, you’re wrong. But even though it’s not easy being green, the important thing is to try. Colm O’Regan is flying the flag for the eco-anxious and the environmentally stressed.
Bestselling author Colm O'Regan is a worrier. A professional one. Caution is his watchword. Risk aversion is his love language. Now Colm is grappling with the biggest worry of all: the whole 'planet being on fire' thing and how exactly we can help. Don't worry, this isn't a book telling you how to live off the grid and make your own planet-friendly soap from woodlice (that's the sequel). Instead, Climate Worrier is about ... Read morethe journey, about trying (and often failing) to be part of the solution to the big issues, while not despairing at the endless hypocrisies that come from also being part of the problem. It's about trying to be become the greenest version of yourself; about joining the ranks of those who give a shit and do a bit. So if you've fretted about: - using your diesel car to get closer to nature, - eating your ethical food off a plastic plate, - existing and have a general feeling we're all doing too little, too late, Climate Worrier is the book for you. Show Less

About Colm O’Regan
Colm O'Regan is the author of six best-selling fiction and non-fiction books including Bolloxology and The Book of Irish Mammies. As a stand-up comedian, he has performed all over the world and has featured on RTE's Late Late Show . He writes a weekly column for the Irish Examiner and has written regular radio and TV diaries for RTE Radio ... Read more1's Drivetime and BBC World Service's In The Balance. He lives in Dublin with his family. Show Less

Reviews for Climate Worrier: A Hypocrite’s Guide to Saving the Planet
'O'Regan never gets it wrong' - THE SUNDAY BUSINESS POST

Goodreads reviews for Climate Worrier: A Hypocrite’s Guide to Saving the Planet