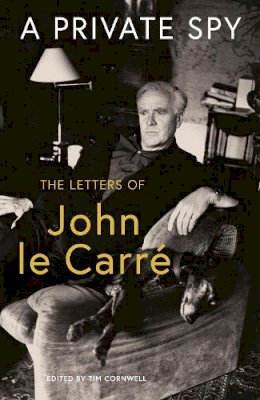 Will be shipped on or around publication date

Description for A Private Spy: The Letters of John le Carré 1945-2020 Paperback. *****THIS IS A PREORDER TO BE DELIVERED ON OR AROUND THE PUBLICATION DATE IN NOVEMBER 2022****
John le Carre was a defining writer of his time. From The Spy Who Came in from the Cold, which changed our understanding of the secret agent from guns and Martinis to shadows and moral ambiguity, to Agent Running in the Field, in which modern Britain is mired in political corruption, he catalogued our sins and recounted the journey of the Anglosphere into the twenty-first century. In these letters, le Carre reveals himself to be a consummate correspondent as well as a master novelist. A Private Spy spans seven decades and chronicles not only le Carre's own ... Read morelife but the turbulent times to which he was witness. Beginning with his 1940s childhood, it includes accounts of his National Service and his time at Oxford, and his days teaching the 'chinless, pointy-nosed gooseberry-eyed British lords' at Eton. It describes his entry into MI5 and the rise of the Iron Curtain, and the flowering of his career as a novelist in reaction to the building of the Berlin Wall. Through his letters we travel with him from the Second World War period to the immediate moment in which we live. At the heart of the collection is le Carre the writer: researching, creating and editing, engaging with readers, publishers, film-makers and actors, with politicians and public figures. We find le Carre writing to Alec Guinness to persuade him to take on the role of George Smiley, and later arguing the immorality of the War on Terror with the chief of the German internal security service. In A Private Spy what emerges is a portrait not only of the writer, or of the global intellectual, but, in his own words, of the very private, very passionate and very real man behind the name. Show Less

About John Le Carré
John le Carre was born in 1931. For six decades, he wrote novels that came to define our age. The son of a confidence trickster, he spent his childhood between boarding school and the London underworld. At sixteen he found refuge at the university of Bern, then later at Oxford. A spell of teaching at Eton led him to a ... Read moreshort career in British Intelligence (MI5&6). He published his debut novel, Call for the Dead, in 1961 while still a secret servant. His third novel, The Spy Who Came in from the Cold, secured him a worldwide reputation, which was consolidated by the acclaim for his trilogy Tinker Tailor Soldier Spy, The Honourable Schoolboy and Smiley's People. At the end of the Cold War, le Carre widened his scope to explore an international landscape including the arms trade and the War on Terror. His memoir, The Pigeon Tunnel, was published in 2016 and the last George Smiley novel, A Legacy of Spies, appeared in 2017. He died on 12 December 2020. His posthumous novel Silverview was published in 2021. Show Less

Reviews for A Private Spy: The Letters of John le Carré 1945-2020
A towering writer
Margaret Atwood [He had a] rare command of language and unique understanding of how the world really works
Daily Telegraph on Silverview
The finest, wisest storyteller
Richard Osman A literary giant
Stephen King

Goodreads reviews for A Private Spy: The Letters of John le Carré 1945-2020