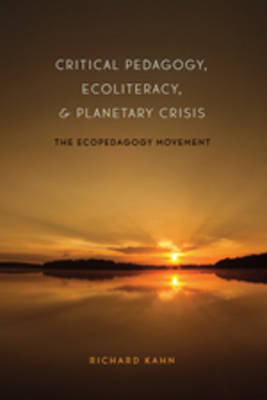 Description for Critical Pedagogy, Ecoliteracy, and Planetary Crisis (Counterpoints: Studies in the Postmodern Theory of Education) Paperback. Critical Pedagogy, Ecoliteracy, and Planetary Crisis Series: Counterpoints. Num Pages: 186 pages. BIC Classification: HPS; JNA; JNP; JNSC; PSAF. Category: (P) Professional & Vocational. Dimension: 153 x 225 x 14. Weight in Grams: 306.
We live in a time of unprecedented planetary ecocrisis, one that poses the serious and ongoing threat of mass extinction. What role can critical pedagogy play in the face of such burgeoning catastrophe? Drawing upon a range of theoretical influences - including Paulo Freire, Ivan Illich, Herbert Marcuse, traditional ecological knowledge, and the cognitive praxis produced by today's grassroots activists in the alter-globalization, animal and earth liberation, and other radical social movements - this book offers the foundations of a philosophy of ecopedagogy for the global north. In so doing, it poses challenges to today's dominant ecoliteracy paradigms and programs, ... Read moresuch as education for sustainable development, while theorizing the needed reconstruction of critical pedagogy itself in light of our presently disastrous ecological conditions. Students and teachers of critical pedagogy at all levels, as well as those involved in environmental studies and various forms of sustainability education, will find this book a powerful provocation to adjust their thinking and practice to better align with those who seek to abolish forms of culture predicated upon planetary extermination and the domination of nature. Show Less

About Richard Kahn
The Author: Richard Kahn, Ph.D. (UCLA), is a critical theorist of education who is internationally recognized for his work on ecopedagogy. A long-time anarcho-vegan activist, he regularly works on behalf of animal, ecological, and social justice causes. He is Assistant Professor of Educational Foundations and Research at the University of North Dakota, and presently serves as the editor of Green ... Read moreTheory & Praxis: The Journal of Ecopedagogy. More information about him can be found at: http://richardkahn.org. Show Less

Reviews for Critical Pedagogy, Ecoliteracy, and Planetary Crisis (Counterpoints: Studies in the Postmodern Theory of Education)
Richard Kahn is one of the most brilliant young scholars writing in the field of pedagogy today. He is breaking new ground in a powerful and engaged manner that speaks truth to power. Kahn's work will, in many ways, set the standard for pedagogical work in the years to come. We ignore Kahn's work at our peril. This is a ... Read moretimely and urgent work. (Peter McLaren, Professor in Urban Education, Graduate School of Education and Information Studies, UCLA) Richard Kahn's ecopedagogy courageously challenges educators to place ecoliteracy as the central moral challenge of our times. Our shared hope lies in taking his invitation seriously in our studies. For healing our moral economy and our damaged ecology, Kahn leads the way in regenerating philosophies from which the system has tragically moved further and further away. (Madhu Suri Prakash, Professor, The Pennsylvania State University) Richard Kahn has written a dazzling book with the urgency befitting his focus: the ecological crisis that is already upon us, the looming environmental catastrophe worldwide, and the breathtaking arrogance with which powerful economic forces and their political hirelings miseducate, mislead, and misdirect any honest accounting of the mess we're in, or the broad outlines of what is to be done. Kahn aims to shock us awake, to shake us from our deep, deep and sometimes willful sleep of denial, but that is just his opening salvo. His more ambitious project is to contribute to the creation of a mighty and unstoppable social movement geared toward grounded activism on behalf of a humane, balanced, and livable future. Kahn's ethical vision as well as his clear, compelling representation of ecopedagogy and ecoliteracy will change the way we look at education and struggle in and for democracy. This book is essential reading. (William Ayers, Distinguished Professor of Education at the University of Illinois at Chicago, and Author of `To Teach' and `Teaching toward Freedom') This book deals with one of the most important contemporary educational movements: ecopedagogy. In times of crisis convergences - such as the one we are living in, with global warming and profound climatic changes - this book brings an invaluable and accurate contribution, not only to educational theory, but also to the tradition of emancipatory pedagogical practice. (Moacir Gadotti, Director, Paulo Freire Institute, Sao Paulo, Brazil) Richard Kahn's `Critical Pedagogy, Ecoliteracy, and Planetary Crisis' is a groundbreaking work that moves the field of critical pedagogy into a visionary mode. Not to address the ecological crisis front and center in these crucial moments of the twenty-first century would be derelict. This work creates a wonderful opening linking critical pedagogy to the emergent scholarship related to ecological literacy. (Edmund O'Sullivan, Professor Emeritus, Ontario Institute for Studies in Education) Finally, a voice in education that blends critical theory with an ecological ethic inclusive of animal others. Richard Kahn breaks new ground with his ecopedagogy. His book will challenge critical educators to wake up and respond to the times we live in. (David Greenwood, Associate Professor, College of Education, Washington State University) Here we have education with enlightenment, humanity without hypocrisy, and pedagogy with a punch. Moving from critical pedagogy to ecopedagogy, Kahn transcends the entrenched prejudices and profound limitations of humanism, however radical, for a new educational, ethical, and political paradigm centered on earthlings. He updates pedagogy for the twenty-first century, making it relevant to the social and ecological crises of this profound and unprecedented Show Less