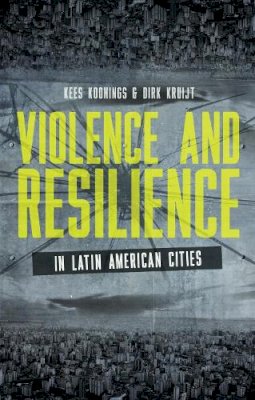 Reviews for Violence and Resilience in Latin American Cities
Highly recommended - this crucially important volume focuses on the hope that is present in some of the world's most violent urban spaces.
Choice
An important collection that calls attention not only to the fracture and fragility of Latin American cities, but to their resilience in responding to endemic violence and inequality. A valuable contribution sure to be ... Read moreembraced by scholars and students.
Daniel Goldstein, author of Outlawed: Between Security and Rights in a Bolivian City
Provides an excellent overview of the Janus-faced reality of contemporary Latin American cities as sites of conflict and violence on the one hand, but also resilience and innovation on the other. Offering an exceptionally coherent set of detailed case studies based on original research, it will undoubtedly become a major reference point in the urban field for years to come.
Dennis Rodgers, University of Glasgow
This volume makes a critical contribution to Latin American and Caribbean studies by providing a comprehensive discussion of the violence facing cities in the region and the ways that some cities have begun to develop successful responses.
Enrique Desmond Arias, author of Drugs and Democracy in Rio de Janeiro
Koonings and Kruijt bring together expertise on urban violence in the cities of Central America, South America and the Caribbean to analyze both the contours of the violence and the forms of resilience which parallel it.
Garth Myers, Trinity College Hartford
Combining deep on-the-ground knowledge, clear writing, and balanced political and social analysis, this indispensable book throws new light on one of the most puzzling, and seemingly intractable issues of twenty first century Latin America.
Javier Auyero, author of In Harm's Way: The Dynamics of Urban Violence
Koonings, Krujit and their colleagues have established a new benchmark in the qualitative analysis of urban crime trends and their complex relationships to economic informality, corrupt policing, and neighborhood resilience .
Mike Davis, author of Planet of Slums and Evil Paradises
The diversity of case studies and the in-depth research of each of the authors reveal a multi-faceted image of Latin American cities, violence and insecurity, which calls for acknowledging the specific historical and local contexts.
Environment and Urbanization
Show Less

Goodreads reviews for Violence and Resilience in Latin American Cities