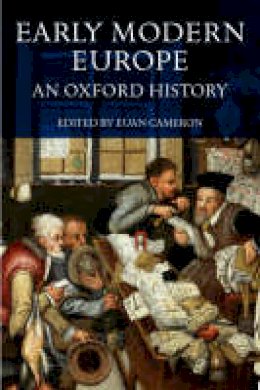 Description for Early Modern Europe Paperback. An introduction to Europe between 1500 and 1800. "Early modern" is the term used by historians for the period between the end of the Middle Ages and the start of the 19th century. It examines society, religion, the economy and politics. Editor(s): Cameron, Euan K. Num Pages: 440 pages, numerous halftones. BIC Classification: 1D; 3JB; 3JD; 3JF; 3JH; HBJD; HBLH; HBLL. Category: (U) Tertiary Education (US: College). Dimension: 233 x 156 x 22. Weight in Grams: 662.
'Early Modern' is a term applied to the period which falls between the end of the middle ages and the beginning of the nineteenth century. This book provides a comprehensive introduction to Europe in this period, exploring the changes and transitions involved in the move towards modernity. Nine newly commissioned chapters under the careful editorship of Euan Cameron cover social, political, economic, and cultural perspectives, all contributing to a full and vibrant picture of Europe during this time. The chapters are organized thematically, and consider the evolving European economy and society, the impact of ... Read morenew ideas on religion, and the emergence of modern political attitudes and techniques. The text is complemented with many illustrations throughout to give a feel of the changes in life beyond the raw historical data. Show Less

About
Euan Cameron is Professor of Early Modern History at the University of Newcastle upon Tyne.

Reviews for Early Modern Europe
this is a coherent, informative and thoughtful treatment of three centuries of European history./Paul Dukes, Journal of European Studies 32 (2002) this lucidly written, erudite and important book/ Patrick Richards, Day By Day, 30/04/99.