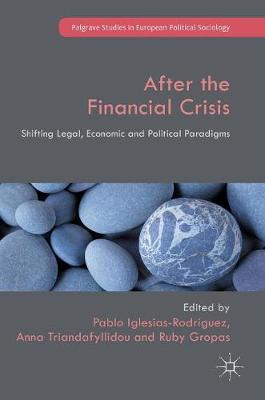 Description for After the Financial Crisis: Shifting Legal, Economic and Political Paradigms (Palgrave Studies in European Political Sociology) Hardcover. Editor(s): Iglesias-Rodriguez, Pablo; Triandafyllidou, Anna; Gropas, Ruby. Series: Palgrave Studies in European Political Sociology. Num Pages: 374 pages, 3 black & white illustrations, 16 colour illustrations, 5 black & white tables, biography. BIC Classification: 3JM; JP; KCP; KCX; LNP. Category: (G) General (US: Trade). Dimension: 250 x 158 x 26. Weight in Grams: 598.
This international collection studies how the financial crisis of 2007 and the ensuing economic and political crises in Europe and North America have triggered a process of change in the field of economics, law and politics. Contributors to this book argue that both elites and citizens have had to rethink the nature of the market, the role of the state as a market regulator and as a provider of welfare, the role of political parties in representing society's main political and social cleavages, the role of civil society in voicing the concerns of ... Read morecitizens, and the role of the citizen as the ultimate source of power in a democracy but also as a fundamentally powerless subject in a global economy. The book studies the actors, the areas and the processes that have carried forward the change and proposes the notion of `incomplete paradigm shift' to analyse this change. Its authors explore the multiple dimensions of paradigm shifts and their differentiated evolution, arguing that today we witness an incomplete paradigm shift of financial regulations, economic models and welfare systems, but a stillbirth of a new political and economic paradigm. Show Less