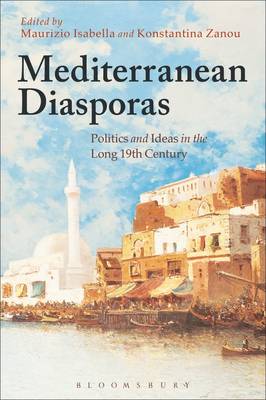 Mediterranean Diasporas: Politics and Ideas in the Long 19th Century

Description for Mediterranean Diasporas: Politics and Ideas in the Long 19th Century Paperback. Editor(s): Isabella, Maurizio; Zanou, Konstantina. Num Pages: 240 pages. BIC Classification: 1QRM; 3JH; HBG; HBLL; JFCX. Category: (G) General (US: Trade). Dimension: 236 x 157 x 13. Weight in Grams: 372.
Mediterranean Diasporas looks at the relationship between displacement and the circulation of ideas within and from the Mediterranean basin in the long 19th century. In bringing together leading historians working on Southern Europe, the Balkans, and the Ottoman Empire for the first time, it builds bridges across national historiographies, raises a number of comparative questions and unveils unexplored intellectual connections and ideological formulations. The book shows that in the so-called age of nationalism the idea of the nation state was by no means dominant, as displaced intellectuals and migrant communities developed notions of double national ... Read moreaffiliations, imperial patriotism and liberal imperialism. By adopting the Mediterranean as a framework of analysis, the collection offers a fresh contribution to the growing field of transnational and global intellectual history, revising the genealogy of 19th-century nationalism and liberalism, and reveals new perspectives on the intellectual dynamics of the age of revolutions. Show Less

About Maurizio Isabella and Konstantina Zanou
Maurizio Isabella is Senior Lecturer in History at Queen Mary, University of London, UK. He is author of Risorgimento in Exile: Italian Emigres and the Liberal International in the Post- Napoleonic Era (2009). Konstantina Zanou is a visiting fellow at the Paris Institute of Advanced Studies, France and Assistant Professor of Mediterranean Studies, Columbia University, USA ... Read more(from fall 2016). Show Less

Reviews for Mediterranean Diasporas: Politics and Ideas in the Long 19th Century
This wonderful, inspiring volume can be expected to play an important role in how we tell (and teach) the story of Mediterranean history in the long nineteenth century. Connected history has never been so good!
European History Quarterly
Mediterranean Diasporas is a highly sophisticated and engaging example of the new histories of connection which seek to understand the ... Read morehistory of today's globalised world. The introduction, afterword and ten chapters consider the movement of people and ideas across this iconic sea from the early-nineteenth century 'age of revolutions' to the eve of the First World War. Avoiding any easy dichotomy beween the national, the diasporic and the global, the volume brings these concepts into productive dialogue.
C. A. Bayly, formerly Queen Mary, University of London, UK
In this terrific sequence of essays, Fernand Braudel's Mediterranean world persists into modern times, but with regional unity and diasporic traffic provided by concepts, including revolutionary ones. Bringing the burgeoning study of the 'corrupting sea' beyond its normal chronological limits, the volume brightly illuminates the ramifications of liberalism, nationalism, and empire, and takes a valuable further step in the construction of an intellectual history across long distances.
Samuel Moyn, Harvard University, USA
Amidst the abundance of the scholarship on the Mediterranean, this volume is stunning in both its sweep and its depth. As an ensemble, the editors' comprehensive introduction, combined with the contributors' highly original research on mobile people, power, and ideas, make this a monumental contribution. Given current Mediterranean affairs, this work could not be more timely. Moreover, scholars interested in diasporas across the globe will find much that is new here.
Julia Clancy-Smith, University of Arizona, USA
The contributions, which culminate in a successful collective study, present analyzes of individual political, predominantly liberal intellectuals in the Mediterranean, whose transnational commitment has contributed significantly to the transformation of the (national) cultures and societies of the Mediterranean in the 19th century.
H-Soz-Kult (Bloomsbury Translation)
Show Less

Goodreads reviews for Mediterranean Diasporas: Politics and Ideas in the Long 19th Century