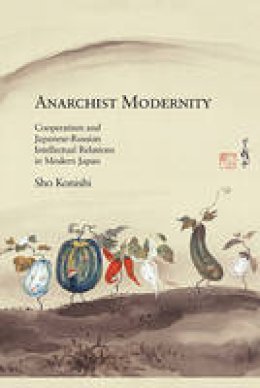 Description for Anarchist Modernity Hardcover. Sho Konishi traces the emergence from 1860 to 1930 of transnational networks of Russian and Japanese "cooperatist anarchists" devoted to creating a state-free society. Arguing that this radical movement forms one of the intellectual foundations of modern Japan, Konishi offers a new approach to Japanese history that challenges Western narratives. Series: Harvard East Asian Monographs. Num Pages: 450 pages, 15 halftones. BIC Classification: 1DVUA; 1FPJ; HBJF; JFCX. Category: (G) General (US: Trade). Dimension: 230 x 162 x 33. Weight in Grams: 750.
Mid-nineteenth century Russian radicals who witnessed the Meiji Restoration saw it as the most sweeping revolution in recent history and the impetus for future global progress. Acting outside imperial encounters, they initiated underground transnational networks with Japan. Prominent intellectuals and cultural figures, from Peter Kropotkin and Lev Tolstoy to Saigo Takamori and Tokutomi Roka, pursued these unofficial relationships through correspondence, travel, and networking, despite diplomatic and military conflicts between their respective nations. Tracing these non-state networks, Anarchist Modernity uncovers a major current in Japanese intellectual and cultural life between 1860 and 1930 that might be described as cooperatist ... Read moreanarchist modernity --a commitment to realizing a modern society through mutual aid and voluntary activity, without the intervention of state governance. These efforts later crystallized into such movements as the Nonwar Movement, Esperantism, and the popularization of the natural sciences. Examining cooperatist anarchism as an intellectual foundation of modern Japan, Sho Konishi offers a new approach to Japanese history that fundamentally challenges the logic of Western modernity. It looks beyond this foundational construct of modern history writing to understand people, practices, and cultural expressions that have been forgotten or dismissed as products of anti-modern nativist counter urges against the West. Show Less

About Sho Konishi
Sho Konishi is an intellectual and cultural historian of modern Japan at the University of Oxford, where he is a Fellow of St Antony's College.

Reviews for Anarchist Modernity
This book offers an outstanding study of 'transnational imagination.' By tracing the close intellectual ties among Russian and Japanese anarchists, Esperantists, and others at the turn of the twentieth century, Konishi shows that there was an alternative world that was being imagined by these men and women, as well as by people (heimin) who sought to go beyond the nation ... Read morestate as the framework for their lives. They were anarchists in that they did not believe in the finality of the state apparatus, but they were, in Konishi's words, 'cooperative anarchists' because they firmly believed in personal and community-level cooperation. They were imagining an alternative world from the one that would come to confirm its nation-centric orientation
and to bring so much tragedy to all people. A superb and even sensational reinterpretation, not just of Japanese history, but also of modern world history.
Akira Iriye, Harvard University Anarchist Modernity makes us rethink what we thought we knew about Japanese history. Konishi spotlights the little-known, yet consequential, interactions between Russian and Japanese thinkers in the making of modern Japan. The book connects all sorts of Japanese developments: the cult of Tolstoy, anarchism and socialism, the 'Nonwar Movement, ' and the striking popularity of Esperanto. We grasp the richness of the struggle by influential Japanese to create a people-centered polity and world order, in contrast to the vision of a powerful European-style state promoted by Japanese leaders. Transnational history at its best, the book reveals how Russo-Japanese discourses on 'cooperatist anarchist modernity' shaped thought and behavior in both countries.
Sheldon Garon, Princeton University From Bakunin and Kropotkin to Esperanto and dung beetles, Sho Konishi's compelling exploration of the transnational intellectual networks linking anarchists in Russia and Japan and the larger meanings of their encounters transforms our understanding of Japan's global past. In its capacious breadth, theoretical sophistication, and empirical rigor, Anarchist Modernity offers a new model for the writing of East Asian international history.
Mark Bradley, University of Chicago Show Less