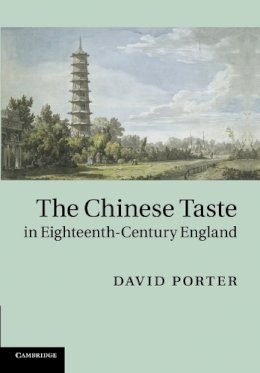 The Chinese Taste in Eighteenth-Century England

Description for The Chinese Taste in Eighteenth-Century England Paperback. A major study of eighteenth-century cultural history and the history of contact and exchange between China and the West. Num Pages: 242 pages, illustrations. BIC Classification: 1DBKE; 1FPC; 3JF; ACB; DSBD; HBTB. Category: (P) Professional & Vocational. Dimension: 231 x 152 x 21. Weight in Grams: 424.
Eighteenth-century consumers in Britain, living in an increasingly globalised world, were infatuated with exotic Chinese and Chinese-styled goods, art and decorative objects. However, they were also often troubled by the alien aesthetic sensibility these goods embodied. This ambivalence figures centrally in the period's experience of China and of contact with foreign countries and cultures more generally. In this book, David Porter analyses the processes by which Chinese aesthetic ideas were assimilated within English culture. Through case studies of individual figures, including William Hogarth and Horace Walpole, and broader reflections on cross-cultural interaction, Porter's readings develop interpretations of eighteenth-century ideas of ... Read moreluxury, consumption, gender, taste and aesthetic nationalism. Illustrated with many examples of Chinese and Chinese-inspired objects and art, this is a major contribution to eighteenth-century cultural history and to the history of contact and exchange between China and the West. Show Less

About David Porter
David Porter is Associate Professor in the Departments of English and Comparative Literature at the University of Michigan.

Reviews for The Chinese Taste in Eighteenth-Century England
'A major contribution to the cultural history of exchange between China and the West.' The Times Literary Supplement 'Historians of eighteenth-century English material culture and its influences have been well served by this erudite and fascinating take on a topic we thought we knew well.' Britain and the World: Historical Journal of The British Scholar Society

Goodreads reviews for The Chinese Taste in Eighteenth-Century England