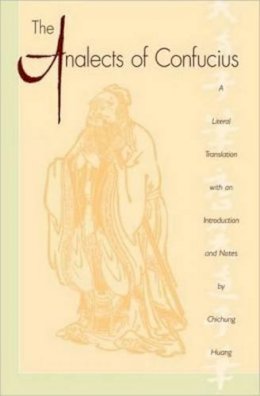 The Analects of Confucius (Lun Yu)

Description for The Analects of Confucius (Lun Yu) Paperback. This volume presents Confucius' analects, which are still influential across the world, 25 centuries on. His sayings (and those of his disciples) form the basis of a distinct social, ethical, and intellectual system. They have retained their relevance and are still admired in today's China. Translator(s): Huang, Chichung. Num Pages: 224 pages, map. BIC Classification: 1FPC; DNF; HPDF; HRKN1. Category: (U) Tertiary Education (US: College). Dimension: 204 x 136 x 15. Weight in Grams: 272.
In the long river of human history, if one person can represent the civilization of a whole nation, it is perhaps Master Kong, better known as Confucius in the West. If there is one single book that can be upheld as the common code of a whole people, it is perhaps Lun Yu, or The Analects. Surely few individuals in history have shaped their country's civilization more profoundly than Master Kong. The great Han historiographer, Si-ma Qian, writing 2,100 years ago said, He may be called the wisest indeed! And, as recently as 1988, at a final ... Read moresession of the first international conference of Nobel prize-winners in Paris, the seventy-five participants, fifty-two of whom were scientists, concluded: If mankind is to survive, it must go back twenty- five centuries in time to tap the wisdom of Confucius . This is a man whose influence in world history is truly incomparable. His sayings (and those of his disciples) form the basis of a distinct social, ethical, and intellectual system.They have retained their freshness and vigour for two and a half millennia, and are still admired in today's China. Compiled by pupils of Confucius's disciples half a century after the Master's death, The Analects of Confucius laid the foundation of his philosophy of humanity-a philosophy aimed at cultivating the individual's moral conduct, achieving family harmony, bringing good order to the state and peace to the empire . Containing 501 very succinct chapters (the longest do not exceed fifteen lines and the shortest are less than one) and organized into twenty books, the collection comprises mostly dialogues between the Master and his disciples and contemporaries. The ethical tenets Confucius put forth not only became the norm of conduct for the officialdom and intelligentsia, but also had a profound impact on the behaviour of the common people.The great sage's unique integration of humanity and righteousness (love and reason) struck a powerful chord in all who attempted to understand his moral philosophy. As the translator Chichung Huang contends, What ethical principle laid down by man could be more sensible that none which blends the best our heart can offer with the best our mind can offer as the guiding light for our conduct throughout our lives? . Ever timely, Confucius's teachings on humanity (family harmony in particular) and righteousness may well serve as a ready-made cure for today's ills in an era which human beings are blinded by force and lust, not unlike Confucius's own day. Far more literal than any English version still in circulation, this brilliant new rendition of The Analects helps the reader not only to acquire and accurate and lucid understanding of the original text, but also to appreciate the imagery, imagery, parallelism, and concision of its classical style.The translator Chichung Huang, a Chinese scholar born in a family of Confucian teachers and schooled in one of the last village Confucian schools in South China, brings to this treasure of world literature a sure voice that captures the power and subtleties of the original. Vivid, simple, and eminently readable, this illuminating work makes the golden teachings of the sage of the East readily available to anyone in search of them. Show Less

About Confucius
About the Translator: Chichung Huang was Professor of Chinese at Bennington College. He had previously taught at Peking University for three decades, two of which were spent in political exile, before coming to the United States.

Reviews for The Analects of Confucius (Lun Yu)
Huang has done a superb job in completing this literal translation of the Analects. It is precise, succinct, loyal to the original text, and sensitive to minor details. His painstaking endeavor deserves high praises.
Chinese Historians

Goodreads reviews for The Analects of Confucius (Lun Yu)