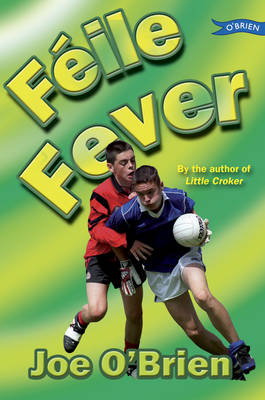 Description for Féile Fever Paperback.
Danny Wilde and his teammates are finding the Under-14s Division tough going. They've lost one of their best goal-scorers to injury and it looks like they'll have no chance of winning the County Feile! Could Todd, the new Australian kid, be the answer to their prayers? Todd's an Aussie Rules player - tough and skilful - but can he become a real GAA player in time? It's all to play for in the second book about GAA player Danny Wilde.

About O'Brien, Joe
Joe O'Brien lives in Ballyfermot in Dublin with his wife and children. He is the author of nine books featuring Alfie Green, a boy who can talk to plants. For older readers he has written three books about Danny Wilde and his Littlestown Crokes GAA team, Legends' Lair (about Charlie Stubbs and his dreams of becoming a soccer player) and ... Read moreone fantasy novel, Beyond the Cherry Tree. He has appeared on RTE's The Den, TV3's Ireland AM and many radio shows. He regularly holds readings in bookshops and libraries around the country. Show Less

Reviews for Féile Fever
'the story zips along at a cracking pace, never flags and yet manages to deal sensitively with issues that are now a reality for many children - issues such as marital break-up and drinking' 'suitable for senior classes in primary schools and as usual, O'
In Touch Magazine 'a must for all young Gaelic fans'
Sunday Independent 'the ... Read morethorough research that Dublin author Joe O'Brien has invested in his GAA storyline pays dividends by giving sporting authenticity to a strong personality led plot ... a good crowd-pleaser for GAA fans aged nine-plus'
Evening Echo 'O'Brien captures well the spirit of the GAA and of teenage boys in this tale of the outsider fitting in' 'The book is sure to cement Danny Wilde's place as a teenage literary hero'
Books Ireland 'O'Brien's authentic depiction of exciting match action will be enjoyed by all young GAA fans'
CBI Bookfest Guide 2009 'For GAA fans, the fast-paced and exciting Feile Fever by Joe O'Brien will hit the spot'
Irish Independent 'an authentic celebration of youth, the GAA and the Feile'
Irish Examiner Show Less