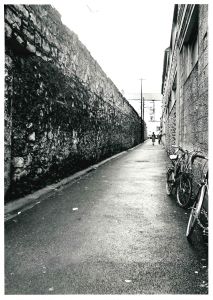 On a 1625 map of the city, this lane is referred to as ‘Crooked Lane’ and a little later in that century, it was commonly known as ‘Céim Cam’. In 1708 it was referred to as ‘Church Lane’ and on two documents dated 1824 it is down as ‘Bohercranmore’ (the Lane of the Big Tree) and also as Church Lane, sometimes called Lána an Teampaill. During the last century it was locally known as ‘O’Gorman’s Lane.

The 1911 census listed six occupied residences on this lane occupied by people named O'Connor, O'Malia, O'Connor, Flanagan, Feeny and Gavin.          In the 19th century, Philip O'Gorman bought the building at the Shop Street end of the Lane and opened a bookshop there, he and his family lived over the shop. He then began to develop a printing works along the lane but unfortunately, it was destroyed in a fire. In the process of rebuilding, Philip tried to buy the vacant cottages at the end of the lane. They could not trace the owners of the properties so they placed advertisements in newspapers in many different countries in the world, asking if anybody had an interest in these cottages. When they received zero response, they then took them over and incorporated them into the printing works. This became a thriving business and ran the length of the lane.

In 1983, there was a major change when the very high wall we see on the left of our first photograph was lowered, with just the base kept. The railings that had once surrounded Eyre Square Park were now placed on this base. This project transformed the area around the church, making it far more accessible and attractive and opening it up to the public. It let a lot of light into the centre of town and was one of the first improvements in the city made by the Corporation in the lead up to the Quincentennial. 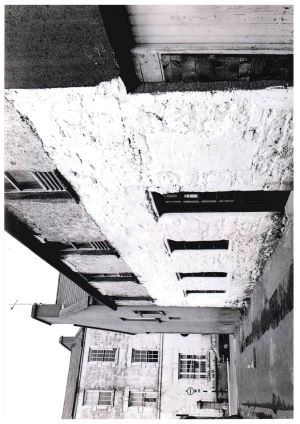 Our second photograph was taken in 1976 by the Lane Studios and shows a closer image of the building at the far end of the lane was known as College House which fronted on to Market Street. It was on the site of, in 1650, the original Athy Castle, reportedly the first stone castle built in Galway. It was later converted into a military barracks in 1822, it was described as "house, yard, garden and old castle". For a number of years it became a school. The building we see was constructed in 1827 for the clergy at a cost of £800 with an extra £30 for the railings and gates and £20 on sundries. William Brady was the architect. Between August 1938 and February 1939, Rev P. Glynn spent £600 on a new hall here and on converting the old library into a dining room. The old dining room was converted into a kitchen. The Diocesan conferences began to be held there and dinner was served to the clergy. Previous conferences were held in St. Mary's College but there was no dinner.

The buildings beside College House were known as The Monastery School, or to Galwegians simply as The Mon. These two buildings have now been demolished and the vacant area is used as a car park.

On Wednesday next (6th of April)  at 1pm, there will be a major addition to the lane when another new wall plaque on the Galway Poetry Trail will be unveiled by the City Council as part of the Cúirt International Festival of LIterature. This latest poem is entitled "All in Together" and was written by Patricia Forde who grew up around the corner in Market Street. It is a beautiful evocation of times past and the games she and her friends used to play up and down the street when there was no traffic. All are welcome to attend.