THE GALWAY SWORD AND MACE 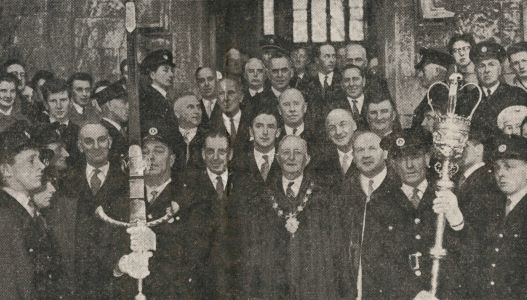 The Galway civic sword and mace are among the finest specimens of municipal corporation insignia in Ireland: the sword is particularly noteworthy and can be compared with the best of civic swords in these islands. Swords and maces were first carried by the king’s servants as symbols of the authority of the king himself. As time went on, the mayors and bailiffs of towns acquired swords and maces of their own, some following charter grants, others by mere assumption without specific authority. These were usually borne before the dignitaries concerned when they went in procession or were actively displayed when they acted otherwise in their official capacity. Maces, which were originally weapons, are staves of authority. Swords symbolise the legitimate use of force.

The earliest documentary reference to the Galway sword appears to be that of the charter granted to the town by King James 1 in 1610. This gave the mayor authority to have a sword carried before him and provided for the appointment of a sword bearer. This blade is almost certainly of 16th century date and of German manufacture. There is no evidence to show who provided the sword for the town; but that it was provided locally, possibly by the mayor or the council, is suggested by its bearing the Galway Arms.

Maces, which were derived from primitive cudgels, were the weapons of the king’s bodyguards. Their symbolic use gradually predominated over their use as weapons. The Galway mace was presented to the then mayor, Edward Eyre in 1712. It is 57 inches long and like the sword, is highly decorated. The bearers of each were elected to do the job. The last recorded public appearance of the sword and mace was at the laying of the foundation stone of the Pro-Cathedral in 1816.

In 1841, the old Galway Corporation was abolished and the last mayor Edmond Blake claimed for compensation for his loss of office. The Town Commissioners rejected his claim but he seems to have been allowed to retain the sword and mace. The Blake family carefully preserved them but when efforts to have them acquired by the city or the National Museum failed, they were sold by Christies in 1935 at auction to William Randolph Hearst for his famous collection. He paid £5,000 for them. Shortly before he died, he expressed a wish that they be returned to Galway as the Municipal Corporation had been re-established in 1937. He had them restored and the mayor of Galway, Jimmy Redington and the town clerk, Paddy Watters travelled to America to receive them.

Sixty years ago this month in a solemn ceremony in the Aula Maxima in UCG, the Taoiseach Seán Lemass formally restored these insignia to the Corporation by handing them over to the mayor, thus ending their 120 year exile from Galway. After the handover, there was a procession to the pro-cathedral led by the Civil Defence Corps, The Order of Malta and the Irish Red Cross followed by the Mayor and Mr. Lemass on the Claddagh coach. Also on the coach were two members of Galway Fire Brigade, wearing their new blue uniforms for the first time, proudly carrying the Sword and Mace.  Firemen have been the bearers of these important symbols ever since.