THE EGG AND BUTTER MARKET IN CHURCH STREET 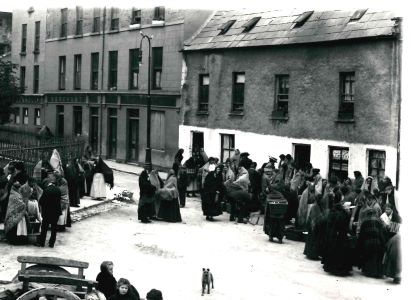 Some weeks ago we wrote about the virtues of country butter being sold at the Saturday Market, but it seems there were occasional vices there too. The ink was hardly dry on the paper when David Barrett sent us an account of a court case that took place at the Galway Petty Sessions in September 1910 before the magistrates Messrs. J. Kilbride and J.S. Young. District Inspector Hildebrand, prosecuted Mrs. Sarah Bane, Moycullen on three different counts of selling butter that was unfit for human consumption to Kate Hoare, Mary Griffin and Norah Joyce. Mr. Cooke, from Blake and Kenny solicitors, appeared for the defence.

Kate Hoare from Mainguard Street stated she purchased butter, made up in two rolls, from the defendant at Church Street on Saturday, August 23rd. She found it was not butter at all that was in the middle but some other substance done up with butter on the outside. She thought it was grease. She went back to the defendant with it within twenty minutes and when the defendant saw her, she started to walk away. When asked what sort of butter she was selling she said “Leave it in the basket and I will give you your money back”. Instead, Mrs. Hoare went to the police.

Mary Griffin from Lower Merchant’s Road bought two rolls for six shillings from the defendant on the same day. She took it home and it tasted shocking. It was not butter in the middle, just a slight coating on the outside. It was polished. She took it back at the same time as Mrs. Hoare. “How do I know what you did with my butter since you took it” the defendant said. The butter was produced in court. Mr. Cooke, for the defence asked “How long did it take you to go home with the butter”, “It did not take me long and it took even shorter to get back with it”.

Norah Joyce from St. John’s Terrace paid the defendant two shillings and seven pence for butter on the same day. ‘What was on the inside was different from what was on the outside’. When she went back, the defendant told her it was not her butter and then some women from the defendant’s area gathered around and accused Norah Joyce of doing something to the butter herself, so she also went to the police.

Dr. T.J. McDonagh examined the butter and said it was not fit for human consumption. The prosecutor said he never asked for a prison sentence where a fine could be imposed instead, but if the defendant prepared and sold butter to poor people with the price of food so dear, he felt the magistrates should protect the people of Galway by imposing a prison sentence. The chairman said the prosecution was made under an Act that had been passed a long time before questions of public health were considered, but the case had been proven and so he was bound, in the interests of the public to inflict the very limited penalty of one month’s imprisonment in each case – to run consecutively. Mr. Cooke pleaded that the defendant had three children, but the magistrates could not mitigate the penalty.

Our photograph, courtesy of the National Library, shows a busy egg and butter market on Church Street c.1890.