THE DAY THE WAR CAME TO GALWAY 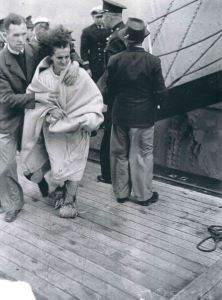 So, on the second day of the war, of the greatest conflict in history, Galway was probably the first place in the world asked to succour the victims, or as we would call them today, refugees. Within an hour of the wireless message, a meeting of the heads of all emergency services and civic and religious leaders was called. A plan of action was drawn up, within 12 hours, 450 victims of man’s inhumanity would arrive. Medical units would have a major role led by Dr. D.V. Morris. Hospitals, nursing homes, guest Houses, hotels and institutions were visited to find out what accommodation was available. It was just after Race Week and places were crowded, but many guests gave up their beds and slept on chairs and couches. Other units made plans for every ambulance, bus and car to stand by to escort survivors to temporary homes and hospitals. Others arranged for emergency canteens and field kitchens on the tender and in the transit sheds at the docks.

Meanwhile, harbour officials were busy with preparations at the docks. The tender, Cathair na Gaillimhe, under Capt. Bill Goggin had steam up in no time, Capt. Tierney, harbour Master had everything ready and Capt. Senan Meskill, senior pilot was on his way to Blackhead to pilot the ‘Knute Nelson’ into the roadstead. By this time, the American Ambassador to Ireland had arrived. He and his staff were to interview the American citizens among the survivors to see if any had seen a submarine, an important mission because if they had, the U.S. might have to reconsider its policy of ‘Splendid Isolation’. None had seen a submarine.

Soon after 6am on the morning of the 5th, the ‘Knute Nelson’ was seen through the haze. Dr. Morris and his team hurried aboard followed by the American party, some military and police. They found a pathetic sight, most of the survivors lying around on the deck wore only night attire, some wrapped in blankets, others in coats and jackets given to them by the crew. Nearly all were suffering from exposure, the medical teams got busy attending to broken limbs, burns and other injuries, in many cases, just in time. Hot drinks and stimulants were given to all, then began the work of removing them to the tender, which was difficult because of the difference in height between the two ships. As quickly as they were brought ashore, they were rushed to their destinations, the injured by ambulance to hospitals accompanied by nurses and orderlies, others to hotels and institutions. 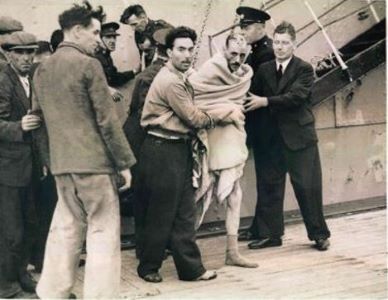 There were many tragic cases of grief when survivors learnt that members of their families were missing. “It was butchery, just butchery” was how one described the experience. By early afternoon, all had been comfortably accommodated. Then began the task of providing them with clothes. Vouchers were provided for all those able to visit shops and purchases were made by committee for those unable to do so.  All were supplied with essential items, the women with perms or sets and the men with shaving articles. All were give the “Freedom of the City” as far as dances, cinemas and buses were concerned, and many gladly availed of invitations to parties and dinners given by private citizens and public bodies.

It was several weeks before the last of them left Galway owing to delays in obtaining passports and other documents. All of the injured were by then able to travel.

Hitler had issued orders for U-boats to follow saying that no passenger ships or liners were to be attacked, but the war was just 10 hours old when Capt. Fritz-Julius Lemp, in charge of U-boat 30 spotted the lights of the Athenia, a passenger ship that had 1,418 passengers and crew on board, and fired a single torpedo which ripped into the port side and penetrated the engine room. There was a massive explosion. Some passengers were preparing for dinner, others were putting their children to bed, some walking the deck, others in the lounge. Panic and havoc raced through the ship as parents tried in vain to reach the berths where their children had been tucked away. Many waded through water trying to find a way up to the deck. Within 20 minutes, the bulkheads gave way and the water poured into the engine room, more explosions could be heard and most of the accommodation below decks was now filled with water.

The orderly and disciplined action of the crew managed to save over a thousand lives by getting people into lifeboats, but sadly, 112 people were lost.

The war had begun.

All of the above is from an account given to me by the late Frank Curran, an official in the Harbour Office. Our photographs show a lady survivor in night attire being helped ashore. The second image shows Frank McCabe (on the right) helping an elderly man ashore.