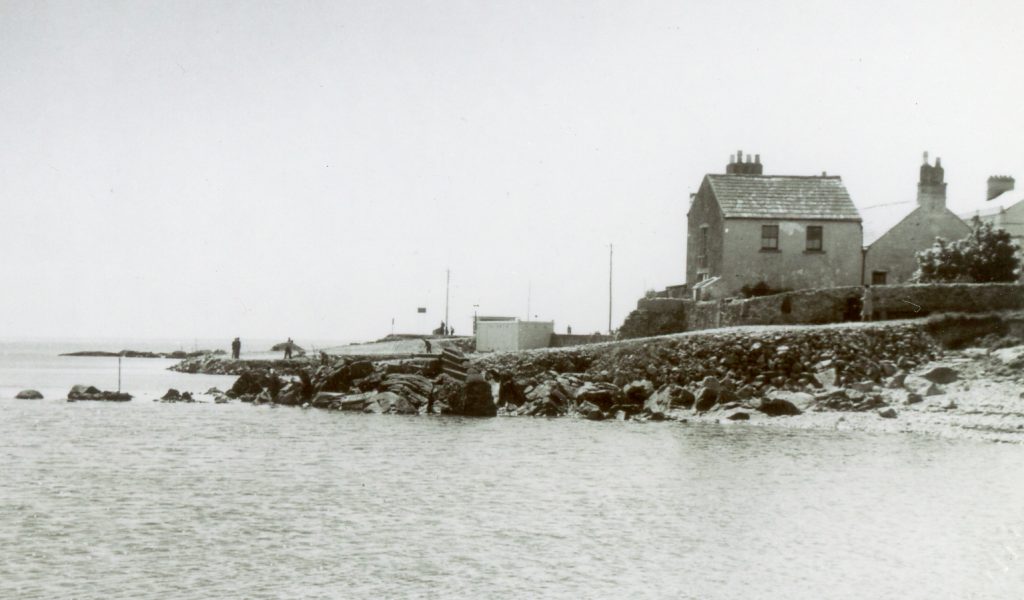 This photograph was taken looking west from where Seapoint is today. The house in the picture was roughly across the street from the Bon Bon. It was once an RIC barracks and was latterly occupied by Monica Wallace. There was a concrete bench along the wall in front of the house which was known as “The Lazy Wall”, a place where old and countrified people, known as “The Fámairí” , would relax and chat and gossip. They came not for the views but for the conversations. Many arrived after their crops had been harvested. They usually brought their own food in the form of home-cured bacon, fresh eggs, butter, cooked chickens and cakes of bread.”You rented a room and you ate yourself”. They would use the family kitchen of the house in which they were staying and consider themselves part of that family for the duration. There was a small bit of beach below the wall where the patrons could bathe or paddle.

As Stephen Rynne wrote “One might sit at the Lazy Wall for a while and depart   with the material for an Abbey play and several short stories. But you pay for what you take. The people you sit with will not tolerate dummies. I am the man from Kildare, I have so many acres and keep so many cows; I am married and have such a family, some going to school and some out of it; I am staying in such and such a place and she is charging so much a week; the crops are all sown and I will get back before the new meadow is fit to mow”.

These are some of the snatches of conversation he overheard  ... “Do ye kill a pig for the house?” asks the old man from Castlebar. “Is it light tobacco you always smoke?” the admission that it was rather took from the killing of the pig. The old man with the pair of sticks has been into Galway by the “buzz” (he called it that at any rate) and he was horror-stricken by the price of potatoes. “18 shillings a sack is it?” piped an ancient woman. “They are robbers entirely in Galway. Sure no potatoes are worth that”. A man joins in “The Lord Almighty save us, I’d sooner fast”.  “I well remember” the drone goes on “the first time they used to spray potatoes. There was all sorts of devices in them times. I often saw farmers whitewashing their potatoes after they had whitewashed the house. They used to sprinkle the plants out of a bucket with a besom of heather before the spraying machines came in. The fear of the blight and the famine was greatly on the people long ago”.

The Ballyhaunis man told how he sold his farm 10 years ago and went to live in the town. “Do you like living in the town?” “I do not, no country man should go into the town. You can go to mass as often as you want but the country is nicer and discreeter”. Another old man’s eyes strayed to the bathing strand and the female figures. “Are the girls wearing them band caps in Ballyhaunis yet?”

“Rowl after sowing. Isn’t that what I’m saying. Rowl the minnit after. The rowler is the master yoke and no mistake”.  “Is it tractor ploughing? You’d be better off without the likes of that. Look-it, if you let out three or four hungry sows in a field, they’d do a better job for you and no expince”.