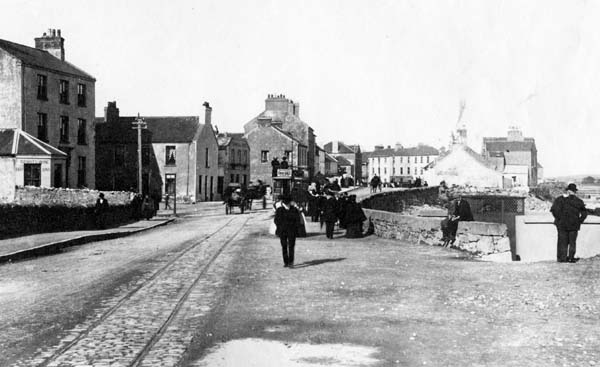 The Midland Great Western Railway arrived in Galway in 1851. Galway was a dreamy town then, recovering from the Famine, but the opening of the railway connected it to most other towns and cities in Ireland and was important from a commercial and from a tourism point of view. In 1872, the Galway Bay Steamboat set up a regular service to the Aran Islands. Galway was expanding and so was the suburb of Salthill, so in 1877, the Galway and Salthill Tramway Company was inaugurated. The Galway Town Commissioners gave the project every encouragement…. In fact they extended the time limit within which the tracks had to be laid.

The single tramline was two and a quarter miles long with 8 passing loops, roughly 250 yards apart, which gave the impression of about a half mile of double track. The rails were steel, 711 lb. per yard, a heavy type for horse traction. The gauge was 3’ wide and the trams were horse drawn…there was no electricity in Galway for another 12 years or so. The paving along the route was of limestone setts. Everyone was watchful over the damage which might be done to the street surfaces by the tramways, but in those early days there was a fund of goodwill for the enterprise. The cost of construction was £13,000.

The line was ceremonially opened on October 1st, 1879, the occasion being marked by the consumption of champagne when the first tram reached Salthill. The gentry of the town and the surrounding locality were invited to seats in the tramway cars on their maiden trips and the greatest enthusiasm was evinced on the part of the public, who assembled in thousands along the streets and wished in their own native simplicity a very long life and prosperity to the contractor and gentlemen connected with the Tramway Company. The line left the depot in Forster Street, passed the Great Southern, through Williamsgate St., Shop St., Dominick St., over the swivel bridge and on to the Salthill Road. The terminus was opposite the Eglinton Hotel. The track was for the most part level, but an extra horse was required to pull the tram up Kingshill. There was a service every ten minutes, and in those early days, the last one third of the journey was virtually in the countryside with occasional thatched cottages and green fields. 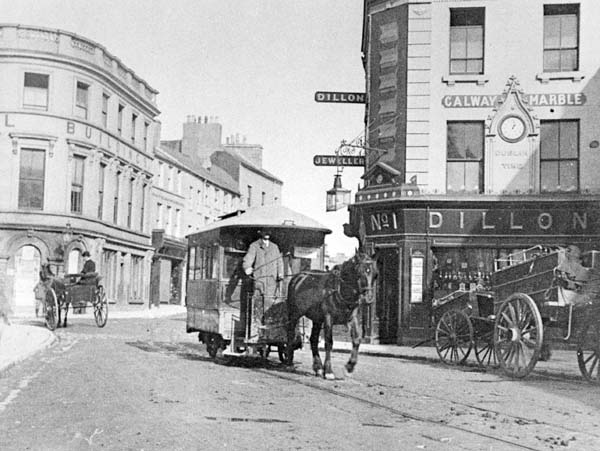 Fares were not to be more than 2d per mile and for labourers and artisans not more than 1d per mile. Passengers were allowed 28lb of personal luggage free, but the company were not obliged to carry goods. On fair days, the passengers were often accompanied by ducks and hens and even the occasional piglet on the way to market. Galway had a tram transport system which was well ahead of many large cities in Europe.

The Company obtained 5 open-topped 4-wheel cars for the opening of the line. A total of 36 passengers was carried in these cars, evenly divided between the saloon and the upper deck with its longitudinal knifeboard seating. The top deck had large iron railings, and large advertising panels which were known as ‘decency boards’ because of ladies sitting on the top deck.

In the autumn of 1880, the Company were allowed to erect a shed at Salthill to afford shelter for the public. In 1888, they bought single decker trams for use in winter. These had a dome shaped roof and a small balcony in front for the driver, and were referred to by authors Somerville and Ross as “The little one-horsed trams (which) glide along the desolate shining road like white backed beetles”.

In 1909, a further batch of five cars was delivered with upper deck transverse seats but they only saw short service as all the best horses were commandeered by the British Army to serve in Flanders during the First World War. The company was experiencing financial difficulties anyway, but without its motive power, the line quickly succumbed and the final closure was in 1919. During its brief existence, the Tram Company helped to connect the city to the suburb and made an enormous contribution to tourism in Salthill.

Our photographs today show two trams waiting for the off at the corner of Eyre Square and Williamsgate Street ; A single-decker winter tram passing Dillon’s Corner; The summer tram waiting opposite the Eglinton Hotel for the return journey to town.

Please forward any queries/comments to This email address is being protected from spambots. You need JavaScript enabled to view it.