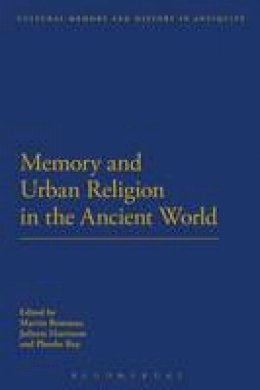 Memory and Urban Religion in the Ancient World

Description for Memory and Urban Religion in the Ancient World Paperback. The role of memory in shaping religion in the ancient cities of Mesopotamia, Egypt, Greece and Rome. Editor(s): Bommas, Martin; Harrisson, Juliette; Roy, Phoebe. Series: Cultural Memory and History in Antiquity. Num Pages: 320 pages, 6 illus. BIC Classification: 1QDA; HBLA; HRKP; HRLM. Category: (P) Professional & Vocational; (U) Tertiary Education (US: College). Dimension: 236 x 158 x 18. Weight in Grams: 460.
Memory and Urban Religion in the Ancient World brings together scholars and researchers working on memory and religion in ancient urban environments. Chapters explore topics relating to religious traditions and memory, and the multifunctional roles of architectural and geographical sites, mythical figures and events, literary works and artefacts. Pagan religions were often less static and more open to new influences than previously understood. One of the factors that shape religion is how fundamental elements are remembered as valuable and therefore preservable for future generations. Memory, therefore, plays a pivotal role when - as seen in ancient Rome during late antiquity ... Read more- a shift of religions takes place within communities. The significance of memory in ancient societies and how it was promoted, prompted, contested and even destroyed is discussed in detail. This volume, the first of its kind, not only addresses the main cultures of the ancient world - Mesopotamia, Egypt, Greece and Rome - but also looks at urban religious culture and funerary belief, and how concepts of ethnic religion were adapted in new religious environments. Show Less

About
Martin Bommas is senior lecturer in Egyptology at the Institute of Archaeology and Antiquity at the University of Birmingham, UK. He was a research associate of Professor Jan Assmann at the University of Heidelberg, Germany, until 2000, and has published five monographs on ancient Egyptian rituals, religious texts, and memory. Juliette Harrisson is an external lecturer at ... Read morethe University of Birmingham, UK and an associate lecturer with the Open University, UK. Her chief research interest lies in ancient myth and religion in the Roman Empire, studied through the theoretical framework of cultural memory. Show Less

Reviews for Memory and Urban Religion in the Ancient World

Goodreads reviews for Memory and Urban Religion in the Ancient World