Home » Local History » Anything from a Pin to an Elephant: Tales of Norfolk Retail
25%OFF 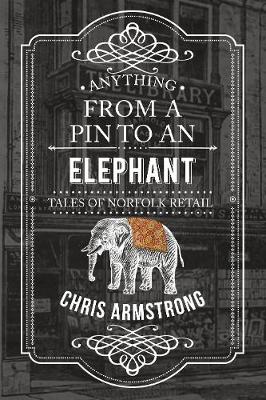 Anything from a Pin to an Elephant: Tales of Norfolk Retail

Description for Anything from a Pin to an Elephant: Tales of Norfolk Retail Paperback. This fascinating book tells the stories of five well-known Norfolk independent department stores and the remarkable people behind them. Num Pages: 128 pages, 80. BIC Classification: 1DBKEAN; KNPR; WQH. Category: (G) General (US: Trade). Dimension: 235 x 165 x 10. Weight in Grams: 306.
The popularity of recent television drama series such as The Paradise and Mr Selfridge, and the splendid three-part documentary Shopgirls: the True Story of Life Behind the Counter, is evidence enough of the level of public interest in the history of the retail trade. Even today, Norfolk boasts a remarkable collection of genuinely independent stores which have survived just about everything that has been thrown at them: wars, bombs, fires, recessions and depressions, family fallings out, takeover bids and a succession of revolutionary changes in the retail market. Chris Armstrong has painstakingly researched the fascinating history of ... Read morefive of Norfolk's most iconic department stores, unearthing many previously unheard stories and meeting some genuinely eccentric characters along the way. One such character, Arnold Roy, one of the founding brothers of Roys of Wroxham, was hailed as `the Norfolk Napoleon' and an extraordinary appearance on the BBC's In Town Tonight in the 1930s gave rise to an avalanche of letters from ladies wishing to marry him, as well as the title of this book (which was his answer to the question of what was sold in his emporium). The author draws attention to the impact of the massive changes in the retail market, from out of town stores to the growth of internet shopping, on these stores and investigates the rapid growth of the shops run by a local charity. Stores featured: Roys of Wroxham, Palmer's of Great Yarmouth, W. J. Aldiss, Jarrold & Sons, Bakers & Larners, The Break chain of charity shops Show Less

About Chris Armstrong
Chris Armstrong was born in Kings Lynn, where his father was Vicar of St Margaret's. In retirement Chris has completed the degree he abandoned nearly 30 years earlier, served as a Magistrate on the Norfolk Bench and been a Board Member of a number of local charities, chairing those of Break and Glebe House School. In 2012 Larks Press published ... Read more`Under the Parson's Nose' a new edition, edited by Chris, of the diaries of his Great Grandfather, the 19th Century High Church Vicar of East Dereham. Show Less

Reviews for Anything from a Pin to an Elephant: Tales of Norfolk Retail

Goodreads reviews for Anything from a Pin to an Elephant: Tales of Norfolk Retail