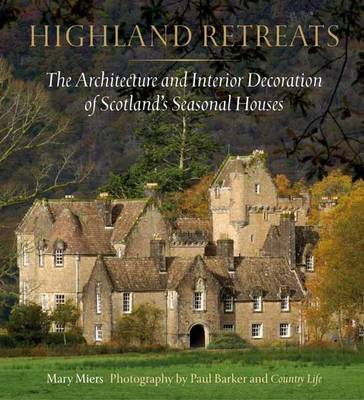 Highland Retreats: The Architecture and Interiors of Scotland's Romantic North

Description for Highland Retreats: The Architecture and Interiors of Scotland's Romantic North Hardcover. A glimpse inside the jewels of Scottish country houses. Num Pages: 288 pages, 250 Colour photographs. BIC Classification: 1DBKS; AMR. Category: (G) General (US: Trade). Dimension: 279 x 254 x 0. Weight in Grams: 567.
Featuring breathtaking photographs of some of Scotland s most remarkable and little-known houses, this book tells the story of how incomers adopted the North of Scotland as a recreational paradise and left an astonishing legacy of architecture and decoration inspired by the romanticized image of the Highlands. Known as shooting lodges because they were designed principally to accommodate the parties of guests that flocked north for the annual sporting season, these houses range from Picturesque cottages ornees and Scotch Baronial castles to Arts and Crafts mansions and modern eco-lodges. While their designs respond to some of Britain s wildest ... Read moreand most stirring landscapes, inside many were equipped with the latest domestic technology and boasted opulent decoration and furnishings from the smartest London and Parisian firms. A good number survive little altered in their original state, and some are still owned by descendants of the families that built them. Images from the famous Country Life Picture Library and specially commissioned photographs evoke the dramatic settings and arresting detail of these houses, making the book as appealing to decorators and architectural historians as it is to travelers and sportsmen. Show Less

About Mary Miers
Mary Miers commutes between her home in the Scottish Highlands and the London offices of Country Life magazine, where she works as fine arts and books editor. Her books include American Houses: The Architecture of Fairfax and Sammons and The English Country House. The late Paul Barker was one of England s premier interior and architectural photographers, whose books ... Read moreincluded English Country House Interiors, The Drawing Room, and English Ruins. Show Less

Reviews for Highland Retreats: The Architecture and Interiors of Scotland's Romantic North

Goodreads reviews for Highland Retreats: The Architecture and Interiors of Scotland's Romantic North