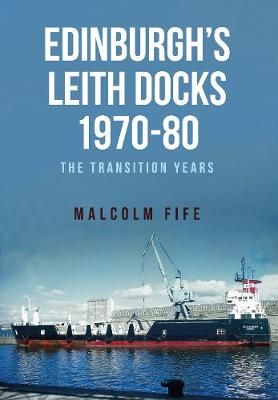 Description for Edinburgh's Leith Docks 1970-80: The Transition Years Paperback. Malcolm Fife explores Leith Docks between 1970 and 1980. Num Pages: 96 pages, 180. BIC Classification: 1DBKSC; 3JJPL; HBTM; WGG. Category: (G) General (US: Trade). Dimension: 234 x 165. .
Leith has been Edinburgh's main port since the Middle Ages. It is one of the oldest harbours in the country, dating back to the twelfth century. Modern Leith docks took shape in the nineteenth century with the construction of stone quays and breakwaters. The late 1930s saw a further major expansion of the docks with the building of the Western Breakwater, greatly expanding the area of the port. After the end of the Second World War, however, there was a gradual decline in the number of cargo ships being handled at Leith. It was bypassed by the container revolution which ... Read morecommenced in the 1960s, with most shipping operators preferring to use Grangemouth Docks instead. Nevertheless, today, it is the largest enclosed deep-water port in Scotland. The port was transformed in 1969 when a large state-of-the-art sea lock was installed, transforming the tidal harbour into a deep-water docks. Its fortunes were further boosted with the discovery of oil in the southern North Sea. A motley collection of vessels operated out of Leith to supply and service the oil rigs. There were further ships involved in the construction of the vast undersea pipeline network. Other examples transported heavy equipment to the Orkney and Shetland Islands where the search for oil was just beginning. Cruise ships also began to call at Leith in the 1970s and this has now become one of its main activities. In this book, Malcolm Fife explores this fascinating decade of change for Leith Docks. Show Less

About Fife, Malcolm
Malcolm Fife has written a number of illustrated articles for both aviation and shipping magazines, and has compiled several books on airfield histories, as well as a guide to Scottish First World War aerodromes.