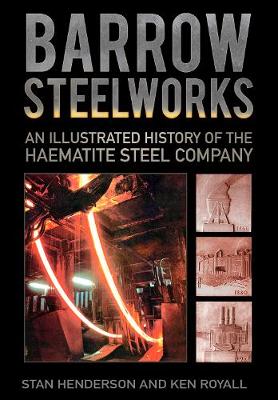 Barrow Steelworks: An Illustrated History of the Haematite Steel Company

Description for Barrow Steelworks: An Illustrated History of the Haematite Steel Company Paperback. Num Pages: 160 pages, 200 black & white illustrations. BIC Classification: 1DBKENM; 3JH; 3JJ; HBJD1; HBLL; HBLW; HBTK. Category: (G) General (US: Trade). Dimension: 173 x 248 x 12. Weight in Grams: 412.
During the second half of the nineteenth century, Barrow-in-Furness became a pioneer in iron and steel production. It went on to grow astronomically - owning collieries in three counties and ore mines in two - and became the largest integrated steelworks in north Lancashire and Cumberland and, at one time, the largest steelworks in the world. Its success was due, in part, to having the prestige of three dukes as directors, as well as to being only 2 miles away from one of the largest and richest iron ore mines in the country. Written by two ... Read moreformer employees of the works, Barrow Steelworks chronicles the company's past from the early empire through the inter-war and post-war years, the development of continuous casting in the 1950s, which revolutionised steelmaking, and, finally, the struggles and ultimate demise from the 1960s onwards of this once prominent industry. Show Less

About Henderson, Stanley, Royall, K.E.
Stanley Henderson comes from a family of steelworkers and worked for a year at Barrow Steelworks in 1964. His own career was in shipbuilding and he was a draughtsman for 30 years. He spent his last 4 years as a BAE quality assurance manager. He has held a long fascination with the iron and steel industry and has researched it ... Read morefor about 20 years. Ken Royall joined Barrow Steelworks in 1947 after being demobbed from the RAF. He began as an instrument technician, became works photographer in 1957, and eventually instrument and fuel engineer. His position prior to redundancy in 1980 was department manager. Show Less

Reviews for Barrow Steelworks: An Illustrated History of the Haematite Steel Company

Goodreads reviews for Barrow Steelworks: An Illustrated History of the Haematite Steel Company