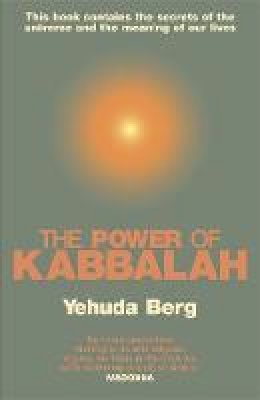 Description for Power of Kabbalah Paperback. With 10,000 trade paperbacks sold in the UK this is the must-have book on the Kabbalah - one of the fastest growing areas of MBS. Num Pages: 288 pages, n/a. BIC Classification: HRJ; VS; VXWK. Category: (G) General (US: Trade). Dimension: 197 x 130 x 19. Weight in Grams: 236.
The new big thing in terms of spiritual enlightenment, the powerful principles of the Kabbalah have attracted a swathe of celebrity followers ranging from Madonna, Jerry Hall, Elizabeth Taylor, Mick Jagger and Guy Ritchie - as well as over 3.5 million other dedicated students worldwide. Previously shrouded in secrecy, its teachings were passed down orally from generation to generation to only an elite few. Now, in THE POWER OF KABBALAH, Rabbi Yehuda Berg has created a user's manual for today's world, in which its wisdom is conveyed in a highly accessible, practical form for all to follow. ... Read more For the first time, these secret teachings are brought to bear on the real world issues faced by us everyday - in our careers, with family and friends, and in our innermost personal thoughts. Rabbi Yehuda Berg sets out a practical collection of principles and instructions for improving our lives - helping us to get to where we really want to be emotionally, spiritually, financially and creatively in all aspects of our life. This truly spiritual book reveals not only what life means, but the actions we can each take to create the life we want and deserve. Show Less

About Berg, Yehuda
Born and raised in Israel, as well as the USA, Yehuda Berg is an ordained rabbi from Yeshiva Knesset Israel in Jerusalem. He is a leading authority on Kabbalah and is Religious Director of The Kabbalah Children's Academy. He lives in Los Angeles and New York with his wife and two children.

Reviews for Power of Kabbalah
This book provides a simple yet powerful and profound message for both novices and seasoned seekers alike.
John Gray, author of Men Are From Mars, Women Are
In a world jam-packed with confusion, chaos and the superficial, The Power of Kabbalah helps you throw on the brakes before you hit the wall. Love it and live it. ... Read more
Sandra Bernhard
The Power of Kabbalah shows you how to reveal the beauty of your spirit and embark on a journey of self-discovery and transformation.
Deepak Chopra
This book should come with a warning: Danger of enlightenment.
Guy Ritchie
Show Less

Goodreads reviews for Power of Kabbalah