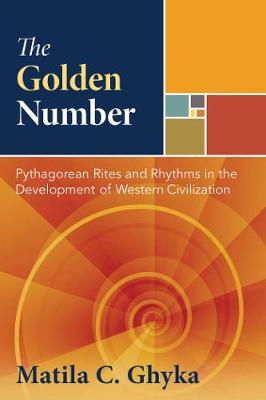 The Golden Number: Pythagorean Rites and Rhythms in the Development of Western Civilization

Description for The Golden Number: Pythagorean Rites and Rhythms in the Development of Western Civilization Hardcover. The first English translation of Ghyka's masterwork on sacred geometry Num Pages: 448 pages, 66 full-page b&w illustrations. BIC Classification: VXA; VXFN. Category: (G) General (US: Trade). Dimension: 164 x 295 x 2. Weight in Grams: 780.
The Golden Number, or Phi ( ), is a geometric ratio found throughout nature, often underlying the dimensions of objects considered especially beautiful. Simplified as 1.618 and symbolized by the Fibonacci sequence, the Golden Number represents the unique relationship within an object where the ratio of a larger part to a smaller part is the same as the ratio of the whole to the larger part. It appears in the proportions of the human face and body as well as in the proportions of animals, plants, and celestial bodies. Presenting Matila Ghyka's classic treatise on the Golden Number for the ... Read morefirst time in English, this book reveals the many ways this ratio can be found not only in the organic forms of nature--such as in the spirals of shells or the number of petals on a flower--but also in the most beautiful and highest creations of humanity. One of the most important concepts of sacred geometry, its mysteries were passed down in an unbroken line of transmission from the Pythagorean brotherhoods through the medieval builders' guilds to the secret societies of 18th-century Europe. Ghyka shows how the secrets of this divine proportion were not sought merely for their value in architecture, painting, and music, but also as a portal to a deeper understanding of the spiritual nature of beauty and the hidden harmonies that connect the whole of creation. Show Less

About Ghyka, Matila C.
Prince Matila Costiesco Ghyka (1881-1965) was a Romanian mathematician, historian, philosopher, and diplomat, who served as the Plenipotentiary Minister in the United Kingdom during the late 1930s. He was also a visiting professor of aesthetics at the University of Southern California and at the Mary Washington College in Virginia. His previous books in English include The Geometry of Art and ... Read moreLife and an autobiography, The World Mine Oyster. Though his prolific literary output includes fiction, poetry, and philosophy, the overarching concern of his work was a synthesis of higher mathematics and the arts. Show Less

Reviews for The Golden Number: Pythagorean Rites and Rhythms in the Development of Western Civilization
Matila Ghyka's The Golden Number is the most comprehensive and convincing demonstration that the golden ratio is indeed, as Pythagoras had posed it, the root number of the universe, expressed both in the living plants and animals and in matter forms at all scales
from galaxies, to crystals, to quantum waves
thus ever-present in mathematics, cosmology, architecture, music, and art at large. ... Read moreJon Graham's excellent translation couldn't be more of a treasure trove at this time.
Chris H. Hardy, Ph.D., author of The Sacred Network
Finally ... a complete translation of Matila Ghyka's masterwork. This foundational book is essential reading for anyone interested in the golden section, harmony, proportion, and beauty in nature, art, and architecture.
David Fideler, author of Restoring the Soul of the World
Show Less

Goodreads reviews for The Golden Number: Pythagorean Rites and Rhythms in the Development of Western Civilization