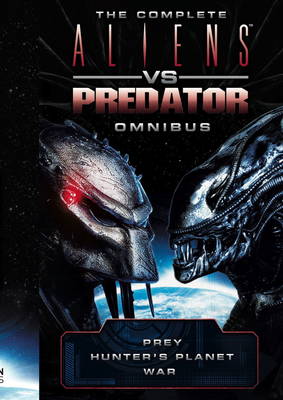 Description for Aliens vs Predator Omnibus Mass Market Paperback. Contains three classic, previously published Alien vs Predator novels: Prey, Hunter's Planet and War. Machiko Noguchi accepted the supervision of the Ryushi ranching colony as a challenge. Little did she know that soon she would defend it with her life. First the carcass of a spider- like alien is discovered. Num Pages: 400 pages. BIC Classification: FL. Category: (G) General (US: Trade). Dimension: 120 x 176 x 49. Weight in Grams: 408.
PREY by Steve Perry & Stephani Perry- Machiko Noguchi accepted the supervision of the ranching colony of Ryushi as a challenge. Little did she know that she would defend it with her life. For the entire unarmed human settlement lies smack between two varieties of monster, one spider-like, one human-like, but infinitely stronger. Monsters who will simply never stop...HUNTER'S PLANET by David Bischoff - On Hunter's Planet, populated by genetically engineered creatures of all kinds, it seems that Predators have begun to seed Aliens. This is bad, real bad, for business, which is why Machiko Noguchi is sent in to ... Read moreconfront the Predators she once considered friends. The only way for her to win is to take control of the most deadly planet in known space...WAR by S. D. Perry - Machiko Noguchi is an outcast being tracked by the Predators who used to be her hunting band. Jess, Lara, and Ellis are the remnants of a bug-hunting team that wiped out an infestation in a Company space station. All four humans must join a desperate fight on the swamp planet Bunda, where fearsome Predators are at war with a ferocious colony of aliens. Show Less

Reviews for Aliens vs Predator Omnibus