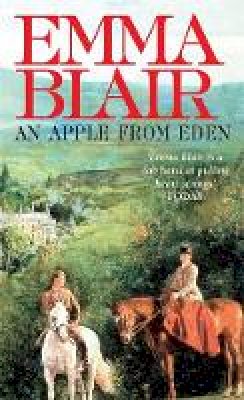 An Apple from Eden

Description for An Apple from Eden Paperback. * A Romeo and Juliet story set in Scotland just after World War II. Num Pages: 480 pages. BIC Classification: FRD. Category: (G) General (US: Trade). Dimension: 176 x 110 x 31. Weight in Grams: 262. Good clean copy with some minor shelf wear
Bridie gets a job as a maid on Sir Ian of Seaton's estate and, much against her better judgement and will, falls in love with Sir Ian's brother's step-son, also called Ian. Ian optimistically feels that his father will understand and let them marry but Bridie expects what she gets - dismissal, with Ian threatened with the loss of his inheritance. Ian then gets involved with a burglary on the estate and is killed and Bridie, on hearing this, deciding she can't bear to live with Ian dead, goes out into the snow, lies by his grave and ... Read morefreezes to death.... The various sub-plots which flesh out this moving story make it a great Scottish women's read. Show Less

About Blair, Emma
Emma Blair was a pen name for Scottish actor and author Iain Blair, who began writing in his spare time and whose first novel, Where No Man Cries, was published in 1982. During a writing career spanning three decades he produced some thirty novels, but his true identity remained a secret until 1998 when his novel ... Read moreFlower of Scotland was nominated for the RNA Romantic Novel of the Year award. He was one of Britain's most popular authors and his books among the most borrowed from libraries. Iain Blair died in July 2011. Show Less

Reviews for An Apple from Eden

Goodreads reviews for An Apple from Eden