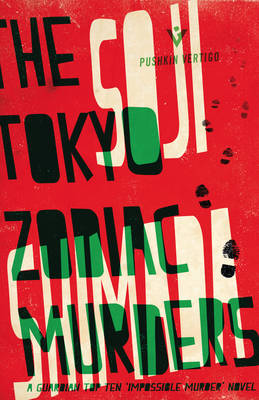 Description for The Tokyo Zodiac Murders (Pushkin Vertigo) Paperback. A gripping tale of magic and illusion by Japan's master mystery storyteller. Translator(s): MacKenzie, Ross; MacKenzie, Shika. Num Pages: 320 pages, illustrations. BIC Classification: FF; FYT. Category: (G) General (US: Trade). Dimension: 130 x 198 x 23. Weight in Grams: 226.
Japan, 1936. An old eccentric artist living with seven women has been found dead- in a room locked from the inside. His diaries reveal alchemy, astrology and a complicated plan to kill all seven women. Shortly afterwards, the plan is carried out: the women are found dismembered and buried across rural Japan. By 1979, these Tokyo Zodiac Murders have been obsessing a nation for decades, but not one of them has been solved. A mystery-obsessed illustrator and a talented astrologer set off around the country - and you follow, carrying the enigma of the Zodiac murderer through madness, missed ... Read moreleads and magic tricks. You have all the clues, but can you solve the mystery before they do? Show Less

About Shimada, Soji
Born in 1948 in Hiroshima prefecture, Soji Shimada has been dubbed the 'God of Mystery' by international audiences. A novelist, essayist and short-story writer, he made his literary debut in 1981 with The Tokyo Zodiac Murders, which was shortlisted for the Edogawa Rampo Prize. Blending classical detective fiction with grisly violence and elements of the occult, he has gone on ... Read moreto publish several highly acclaimed series of mystery fiction, including the casebooks of Kiyoshi Mitarai and Takeshi Yoshiki. He is the author of 100+ works in total. In 2009 Shimada received the prestigious Japan Mystery Literature Award in recognition of his life's work. Show Less

Reviews for The Tokyo Zodiac Murders (Pushkin Vertigo)
Ignites the mind Huffington Post Shimada's novel is a classic of the popular Japanese honkaku or authentic subgenre of crime fiction, which prioritises tight plots and carefully scattered clues The National An intricate, compelling, violent, and exciting [read]. Full of hints, it's a budding Sherlock's dream; Shimada encourages the reader to be as much of a detective as ... Read morehis protagonist. Crime Scene A wonderful example of excellent plotting and characterization, with a brilliant sense of the mysterious and the bizarre At the Scene of the Crime Intricately constructed and entertainingly exotic Japan Times Both gory and intelligent Japan Visitor An elaborate puzzle that should appeal to the readers of Keigo Higashino. We Love this Book Intricate and utterly fascinating Austcrime Groundbreaking... Shimada's expansive novel of forensic detection is something entirely original At the Scene of the Crime For those who enjoy the whodunit type of crime novel, the Tokyo Zodiac Murders represents a touch of the exotic while at the same time being a fairly straightforward puzzle. Crime Review Show Less