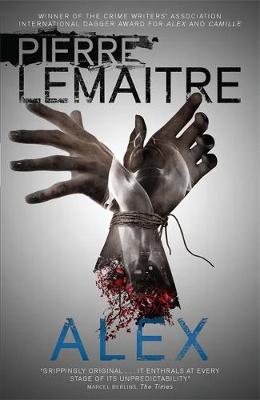 Description for Alex: Book Two of the Brigade Criminelle Trilogy (Brigade Criminelle Series) Paperback. The acclaimed, worldwide bestselling second book in the Brigade Criminelle Trilogy, reissued in a stunning new package to tie in with Lemaitre's standalone thriller Blood Wedding Series: Brigade Criminelle Series. Num Pages: 368 pages. BIC Classification: FF; FYT. Category: (G) General (US: Trade). Dimension: 131 x 198 x 26. Weight in Grams: 252.
SHE'S RUNNING OUT OF TIME Alex Prevost - kidnapped, beaten, suspended from the ceiling of an abandoned warehouse in a wooden cage - is in no position to bargain. Her abductor's only desire is to watch her die. HE WANTS ONLY ONE THING Apart from a shaky police report, Commandant Camille Verh ven has nothing to go on: no suspect, no leads. If he is to find Alex, he will have to get inside her head. ESCAPE IS JUST THE BEGINNING ... Read more Resourceful, tough, beautiful, always two steps ahead - Alex will keep Verh ven guessing till the bitter end. And before long, saving her life will be the least of his worries. Show Less

About Lemaitre, Pierre
Pierre Lemaitre was born in Paris in 1951. He worked for many years as a teacher of literature before becoming a novelist. He was awarded the Crime Writers' Association International Dagger, alongside Fred Vargas, for Alex, and as sole winner for Camille. In 2013 his novel Au revoir la-haut (The Great Swindle, in English translation) won the Prix Goncourt, France's ... Read moreleading literary award. Show Less