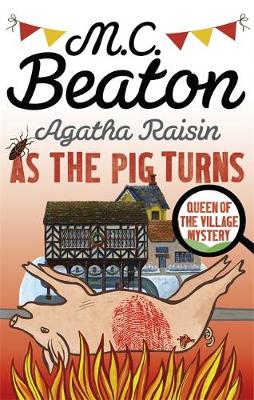 Agatha Raisin: As The Pig Turns

Description for Agatha Raisin: As The Pig Turns Paperback. The as ever eagerly awaited 22nd installment of Agatha Raisin. Series: Agatha Raisin. Num Pages: 272 pages. BIC Classification: FF. Category: (G) General (US: Trade). Dimension: 128 x 198 x 21. Weight in Grams: 194.
Winter Parva, a traditional Cotswolds village next door to Carsely, has decided to throw a celebratory hog roast to mark the beginning of the winter holiday festivities and Agatha Raisin has arrived with friend and rival in the sleuthing business, Toni, to enjoy the merriment. But, as the spit pig is carried towards the bed of fiery charcoal, Agatha - and the rest of the village - realise that things aren't as they seem... Very quickly it transpires that the spit pig is in fact Gary Beech, a policeman not ... Read moremuch loved in Winter Parva. And although Agatha has every intention of leaving the affair to the police, she rapidly changes her mind when she finds out Gary's ex-wife has hired Toni to investigate. Cantankerous and competitive as Agatha is, she has to now join the fray and try and solve the case herself! Praise for M C Beaton's Agatha Raisin series: 'I know I once vowed to read only Agatha Christie for a year but I cheated. My No. 1 mistress, M.C. Beaton and her Agatha Raisin whodunits. Agatha is like Miss Marple with a drinking problem, a pack a day habit and major man lust. In fact, I think she may be living my dream life' Entertainment Weekly. 'Once again M. C. Beaton has concocted an amusing brew of mystery and romance that will keep her fans turning the pages' Publisher's Weekly. 'Pure entertainment' The Guardian. Show Less

About Beaton, M.C.
M.C. Beaton is the internationally bestselling author of both the Agatha Raisin and Hamish Macbeth series, as well as numerous Regency romances. Her books have been translated into seventeen languages and her Agatha Raisin mysteries have been made into a Sky TV series starring Ashley Jensen. M. C. Beaton is consistently the most borrowed UK adult author in British libraries. ... Read moreShe lives in a Cotswold village that is very much like Agatha's beloved Carsely. Show Less

Reviews for Agatha Raisin: As The Pig Turns
Agatha is like Miss Marple with a drinking problem, a pack-a-day habit and major man lust. In fact, I think she could be living my dream life.
Entertainment Weekly
`The detective novels of M C Beaton, a master of outrageous black comedy, have reached cult status.'
Anne Robinson
The Times

Goodreads reviews for Agatha Raisin: As The Pig Turns