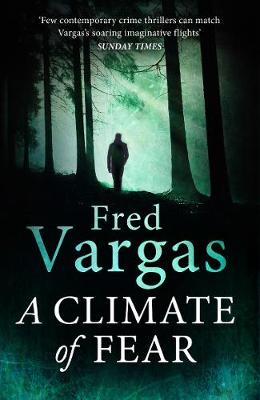 A Climate of Fear

Description for A Climate of Fear Paperback. A woman is found murdered in her bathtub, and the murder made to look like a suicide. A strange symbol is found near the body. Then a second victim is discovered. How are these deaths, and rumours of an Icelandic demon, linked to the secretive Association for the Study of the Writings of Maximilien Robespierre? Translator(s): Reynolds, Sian. Num Pages: 384 pages. BIC Classification: FF; FYT. Category: (G) General (US: Trade). Dimension: 198 x 129. Weight in Grams: 368.
THE NEW INSPECTOR ADAMSBERG NOVEL Shortlisted for the CWA International Dagger 2017 A woman is found dead in her bath. The murder has been disguised as a suicide and a strange symbol is discovered at the scene. Then the symbol is observed near a second victim, who ten years earlier had also taken part in a doomed expedition to Iceland. How are these deaths, and rumours of an Icelandic demon, linked to a secretive local society? And what does the mysterious sign mean? Commissaire Adamsberg is about to ... Read morefind out. Show Less

About Fred Vargas
Fred Vargas was born in Paris in 1957. A historian and archaeologist by profession, she is now a bestselling novelist. Her books have sold over 10 million copies worldwide and have been translated into 45 languages.

Reviews for A Climate of Fear
French crime queen's new mystery - her best yet.
Sunday Times
[Vargas] has won the CWA international dagger four times, confirming her place in the top rank of contemporary crime writers... [A Climate of Fear] is easily the best thing she has ever done... The idea of history repeating itself is at the heart of ... Read morethis stunning novel, which confirms Vargas' fine understanding of the unchanging nature of human passions.
Sunday Times
A reminder that Fred Vargas is one of the most entertainingly eccentric of all current European crime writers... [It] demonstrates why Vargas is so highly esteemed... Highly impressive.
Barry Forshaw
Independent
Vargas writes with strength, erudition and unique imagination... In the crowded world of crime fiction, she's a valuable one-off. A Climate of Fear is one of her best.
Marcel Berlins
The Times
A rich and remarkable work that may be her masterpiece.
Crime Scene
Show Less

Goodreads reviews for A Climate of Fear