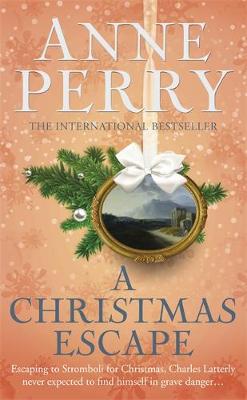 Description for A Christmas Escape Paperback. An Italian Christmas holiday on a dangerous island leads to murder in Anne Perry's 13th enthralling festive Victorian novella Num Pages: 176 pages. BIC Classification: FFH. Category: (G) General (US: Trade). Dimension: 179 x 111 x 15. Weight in Grams: 106.
Set in Italy in 1866, A Christmas Escape is Anne Perry's 13th festive Victorian novella. December, 1866. Charles Latterly, Hester Monk's brother, travels to Italy to spend Christmas on the volcanic island of Stromboli. In his secluded mountain hotel a curious group of people has gathered, and Charles senses a brittle strain between some of his fellow guests as they visit the crater of the island's famous rumbling volcano. While the guests prepare for Christmas, the volcano threatens to erupt, and they realise they must leave at once. As they plan their escape, ... Read morewith Charles thrust reluctantly into leading the group to shelter, one of their number is found dead. But if this is murder, there is a killer in their midst, and Charles must navigate a path to safety... A Christmas Escape is the intriguing and dramatic new festive tale from the pen of Anne Perry, the master of Victorian crime. Show Less

Reviews for A Christmas Escape
With its powerful message of responsibility and redemption - We need both to forgive and to be forgiven - it conveys a moral force in keeping with the season - Wall Street Journal The tale is redolent with Victorian atmosphere, from the hypocritical snobbishness to the rigid social conventions of the time - Tangled Web ... Read more A bite-sized mystery that could be fitted in after your Christmas lunch - Daily Telegraph Show Less

Goodreads reviews for A Christmas Escape