Home » Fiction » Whispers in the Wind 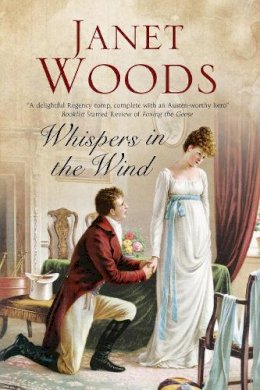 Whispers in the Wind

Description for Whispers in the Wind Hardcover. Num Pages: 240 pages. BIC Classification: 1DBKEWT; 3JH; FRH. Category: (G) General (US: Trade). Dimension: 161 x 224 x 26. Weight in Grams: 428.
He is an Earl who was left at the altar . . . She was his childhood friend, his one true love . . . Now Fate has brought them together again. December 1816. Ryder, Lord Madigan, has never got over the loss of his childhood sweetheart, Adele: the woman who abandoned him at the altar. The woman who humiliated him and left him a broken man. Now she's come home, a widow. Wrongly believing Ryder to be dead, Adele has returned to her Dorset village to reunite with her family and pick ... Read moreup the pieces of her life. Despite everything, she has never stopped loving the man she jilted. But can she put right the wrongs of the past, and bring herself to tell Ryder the truth about why she left him - and the misery of her life since then? Ryder too is keeping secrets from Adele. If the two former lovers are to have a second chance at happiness, they must overcome their pride and admit their true feelings for one another. Show Less

About Woods, Janet
Janet Woods is an Australian, who was born and raised in Dorset, UK. Happily married since her late teens, she and her husband migrated to Australia with the first two of her family of five, after her husband finished his term in the Royal Navy. She became interested in writing when the kids grew up, because she thought she might ... Read morebe able to write a story as readable as some of the authors she was reading. Show Less

Reviews for Whispers in the Wind

Goodreads reviews for Whispers in the Wind