Home » Fiction » The Husband's Secret
17%OFF 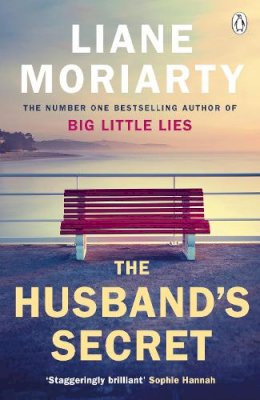 About Moriarty, Liane
Liane Moriarty is the bestselling author of eight novels: Three Wishes, The Last Anniversary, What Alice Forgot, The Hypnotist's Love Story, The Husband's Secret, Big Little Lies, Truly Madly Guilty and Nine Perfect Strangers. The Husband's Secret is a worldwide bestseller which has sold more than three million copies and been translated into over forty languages. Big Little Lies is ... Read morenow an Emmy and Golden Globe-winning HBO series, produced by and starring Nicole Kidman and Reese Witherspoon. Liane lives in Sydney with her husband, son and daughter. Show Less

Reviews for The Husband's Secret
A bittersweet tale by a gifted writer
Women's Weekly on What Alice Forgot
Fascinating and compassionate
Daily Telegraph on The Hypnotist's Love Story
Fresh, very funny and entertaining, but also intelligent and unsentimental
Marian Keyes on Three Wishes
The book's finely-wrought tension holds up until the final page
The Telegraph
It's a ... Read moretense, page-turning story which gradually draws everyone together in a devastating climax. The writing is insightful on the subjects of families and friends, parents and children, husbands and wives. But what makes this a great read are the agonising dilemmas the characters face over blame and guilt, forgiveness and retribution, love and betrayal
The Mail on Sunday, You Magazine
This is such a clever idea. This is powerful, moving and gripping stuff
Star Magazine
The writing is beautiful: sometimes funny, sometimes sad but always compelling
Good Housekeeping
Dark and compelling, this is a must read
Sun
If you like Jodi Picoult, you'll love this addictive new book
Essentials
The story is cleverly plotted, full of suspense and so well-written that it pulls you in from the first page
Sunday Mirror
The Husband's Secret is a staggeringly brilliant novel. It is literally unputdownable
Sophie Hannah Every single one of her books is a great read
E! Online
What would you do if you found a letter in the attic, addressed to you, from your husband - to be opened in the event of his death? Another masterclass from the author of Big Little Lies
Grazia
Show Less

Goodreads reviews for The Husband's Secret