Home » Fiction » The Glorious Heresies
43%OFF 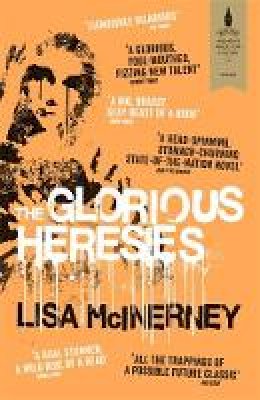 Description for The Glorious Heresies Paperback. A big, bold debut from a true new Irish talent. Series: The Glorious Heresies. Num Pages: 384 pages. BIC Classification: FA. Category: (G) General (US: Trade). Dimension: 130 x 197 x 29. Weight in Grams: 268.
WINNER OF THE BAILEYS' WOMEN'S PRIZE FOR FICTION 2016 WINNER OF THE DESMOND ELLIOT PRIZE 2016 We all do stupid things when we're kids. Ryan Cusack's grown up faster than most - being the oldest of six with a dead mum and an alcoholic dad will do that for you. And nobody says Ryan's stupid. Not even behind his back. It's the people around him who are the problem. The gangland boss using his dad as a 'cleaner'. The neighbour who says she's trying to ... Read morehelp but maybe wants something more than that. The prostitute searching for the man she never knew she'd miss until he disappeared without trace one night . . . The only one on Ryan's side is his girlfriend Karine. If he blows that, he's all alone. But the truth is, you don't know your own strength till you need it. Show Less

About McInerney, Lisa
Lisa McInerney is from Galway and is the author of award-winning blog 'Arse End of Ireland'. The Irish Times has called her 'arguably the most talented writer at work in Ireland today'. Her mother remains unimpressed.

Reviews for The Glorious Heresies
This year's Baileys prize winner, the interlinked stories of chancers, gangsters and no-hopers in Cork city, is crime caper, teen romance and blisteringly dark social satire all rolled into one. Angry, funny and full of heart
Guardian summer reads
A rambunctious portrayal of a swaggering off-kilter underclasss
Patricia Nicol
Sunday Times
There is the humour ... Read moreand the sheer, seething, broiling energy of the prose, which is peppered with the kind of language your mother would call unforgivable. As in Roddy Doyle and Irvine Welsh at their best, it doesn't feel gratuitous. It just feels true
Sunday Times
A daring, exuberant and generous novel
Observer
All the trappings of a possible future classic . . . a fascinating and accomplished commentary on modern Irish life
Big Issue
Fiendishly hilarious
The Times
A superb debut from a confident and comic writer
Mail on Sunday
A big, brassy, sexy beast of a book
Irish Times
A spectacular debut . . . a head-spinning, stomach-churning state-of-the-nation novel about a nation falling apart
Telegraph
A rich, touching, hilarious novel
Financial Times
Show Less

Goodreads reviews for The Glorious Heresies