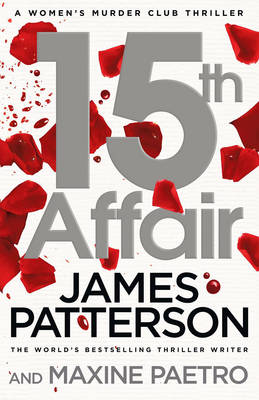 Description for 15th Affair: (Women's Murder Club 15) Paperback. Four bodies are found in a luxury hotel. The first is a man who checked in under a false name. Two are in a room next door, full of surveillance equipment. And the fourth is the house maid, who saw too much. Detective Lindsay Boxer is sent in to investigate and hunt down an elusive and dangerous suspect. Series: Women's Murder Club. Num Pages: 480 pages. BIC Classification: FF; FH. Category: (G) General (US: Trade). Dimension: 131 x 198 x 37. Weight in Grams: 334.
The bestselling 15th novel in the Women's Murder Club series A FIVE-STAR MASSACRE Detective Lindsay Boxer is on the case of a professional multiple murder in a luxury hotel - a man who checked in under a false name, a man and a woman in a room full of surveillance equipment, and a maid who saw too much are all dead. A CASE CLOSE TO HER HEART Her investigation takes her down unexpected paths - and when her husband Joe ... Read moreabruptly goes missing, Lindsay begins to fear that the elusive suspect might be the man she married. THE EVIDENCE DOESN'T LIE... As Lindsay faces the worst case scenario, things get worse when an explosive tragedy rocks San Francisco to its core. Following new leads, Lindsay once again finds them pointing to her own front door - and starts to wonder if this case could be the end not just of her marriage and career, but her life... Show Less

About Patterson, James
JAMES PATTERSON is one of the best-known and biggest-selling writers of all time. His books have sold in excess of 385 million copies worldwide. He is the author of some of the most popular series of the past two decades - the Alex Cross, Women's Murder Club, Detective Michael Bennett and Private novels - and he has written many other ... Read morenumber one bestsellers including romance novels and stand-alone thrillers. James is passionate about encouraging children to read. Inspired by his own son who was a reluctant reader, he also writes a range of books for young readers including the Middle School, I Funny, Treasure Hunters, Dog Diaries and Max Einstein series. James has donated millions in grants to independent bookshops and has been the most borrowed author of adult fiction in UK libraries for the past eleven years in a row. He lives in Florida with his wife and son. Show Less