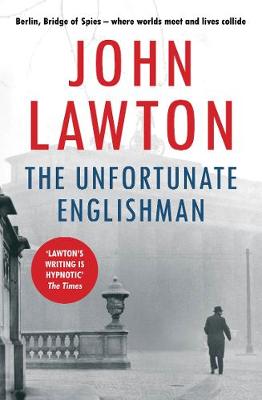 Description for The Unfortunate Englishman Paperback. The second book in the Joe Wilderness series. Series: Joe Wilderness Series. Num Pages: 368 pages. BIC Classification: FHD. Category: (G) General (US: Trade). Dimension: 131 x 198 x 26. Weight in Grams: 256.
A thrilling portrait of 1960s Berlin and Krushchev's Moscow, centring around the exchange of two spies - a Russian working for the KGB, and an unfortunate Englishman. Having shot someone in the chaos of 1963 Berlin, Wilderness finds himself locked up with little chance of escape. But an official pardon through his father-in-law Burne-Jones, a senior agent at MI6, means he is free to go - although forever in Burne-Jones's service. When the Russians started building the Berlin wall in 1961, two 'Unfortunate Englishmen' were trapped on opposite sides. Geoffrey Masefield in the ... Read moreLubyanka, and Bernard Alleyn (alias KGB Captain Leonid Liubimov) in Wormwood Scrubs. In 1965 there is a new plan. To exchange the prisoners, a swap upon Berlin's bridge of spies. But, as ever, Joe has something on the side, just to make it interesting, just to make it profitable... Show Less

About John Lawton
John Lawton worked for Channel 4 for many years, and, among many others, produced Harold Pinter's 'O Superman', the least-watched most-argued-over programme of the 90s. He has written seven novels in his Troy series, two Joe Wilderness novels, the standalone Sweet Sunday, a couple of short stories and the occasional essay. He writes very slowly and almost entirely on the ... Read morehoof in the USA or Italy, but professes to be a resident of a tiny village in the Derbyshire Peak District. He admires the work of Barbara Gowdy, TC Boyle, Oliver Bleeck, Franz Schubert and Clara Schumann - and is passionate about the playing of Maria Joao Pires. He has no known hobbies, belongs to no organisations and hates being photographed. Show Less

Reviews for The Unfortunate Englishman
Lawton builds a wonderfully convincing picture...writing with remarkable authority... as usual with Lawton's books, it's rather more than the sum of its parts.
Spectator on THEN WE TAKE BERLIN
While Lawton's previous novels were distinguished by their precise and elegant prose, Then We Take Berlin offers, courtesy of its Cockney protagonist, a cruder but equally effective vernacular style ... Read moreunderpinned by mordant black humour.
Irish Times on THEN WE TAKE BERLIN
Lawton's up there with Philip Kerr and Alan Furst. Yes, he's that good.
The Sun on THEN WE TAKE BERLIN
A sublimely elegant historical novelist as addictive as crack but overlooked by too many readers for too long.
Daily Telegraph on A LILY OF THE FIELD
Intricate plotting, colourful characters, and a brilliant prose style put Lawton in the front rank of historical thriller writers.
Publishers Weekly
Both books are meticulously researched, tautly plotted, historical thrillers in the moUld of World War II and Cold War fiction by novelists like Alan Furst, Philip Kerr, Eric Ambler, David Downing and Joseph Kanan.
Wall Street Journal on THE UNFORTUNATE ENGLISHMAN and THEN WE TAKE BERLIN
Lawton's gift for memorable atmosphere and characters, intelligent plotting and wry prose put him solidly at the top of anyone's A-list of contemporary spy novelists.
Seattle Times
All these adventures arrive gift-wrapped in writing variously rich, inventive, surprising, informed, bawdy, cynical, heartbreaking and hilarious. However much you know about postwar Berlin, Lawton will take you deeper into its people, conflicts and courage... spy fiction at its best.
Washington Post
A complex and beautifully detailed tale, a full-blooded cold-war spy thriller
Irish Times
[A] cleverly misleading title, one of the many twists in John Lawton's constantly entertaining Cold War saga... The spying detail is well mixed with humour.
The Times
Even reviewers have their favourites and John Lawton is one of mine. Nobody is better at using historical facts as the framework of a really good story... The crowded, complication story is enriched by glimpses of Kennedy and Krushchev, by pinpoint-precise period detail and by interesting, credible characters.
Literary Review
Show Less

Goodreads reviews for The Unfortunate Englishman