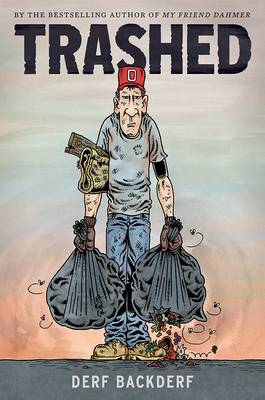 Description for Trashed Paperback. An inside look at the crap job of all crap jobs--garbage collector--by Derf Backderf, author of the critically acclaimed, award-winning national bestseller, My Friend Dahmer Num Pages: 256 pages. BIC Classification: FXZ. Category: (G) General (US: Trade). Dimension: 236 x 153 x 24. Weight in Grams: 568.
Every week we pile our rubbish out on the pavement. We go to work and when we return it's gone. Like magic! The reality is anything but, of course. Trashed, Derf Backderf's follow-up to the critically acclaimed, award-winning national bestseller My Friend Dahmer, is a working man's epic. An ode to the crap job of all crap jobs-but anyone who has ever been trapped in a soul-sucking gig can relate to this tale. Trashed takes place after Derf graduates high school, when he and his childhood pals find themselves working as garbagemen in their Midwestern hometown. Together they clean ... Read morethe streets of pile after pile of stinking garbage, overcoming the unique difficulties of each season and battling small-town bureaucrats and nuisances, all while trying to decide what they want to do with their lives. Interspersed are non-fiction pages that detail the history of trash, the staggering volume of garbage that is produced every day, the nuts and bolts of how our trash is disposed of beyond curbside recycling and what happens to it once it's removed from our houses, our streets and our office buildings. Inspired by Derf's own experiences, Trashed (like My Friend Dahmer) is a hilarious, stomach-churning, in-depth examination of this vast, unknown world, taking readers to a place they have never been before, in a way that only Derf, and comics, can. Show Less

About Backderf, Derf
Derf Backderf has received a host of honours, including the prestigious Robert F. Kennedy Journalism Award for political cartooning and the 2014 Angouleme Revelation Award for My Friend Dahmer. His weekly comic strip, The City, appeared in more than 100 newspapers over the past 22 years.