Home » Comics & Graphic Novels » Graphic novels: true stories & non-fiction » Dad's Not All There Any More: A comic about dementia 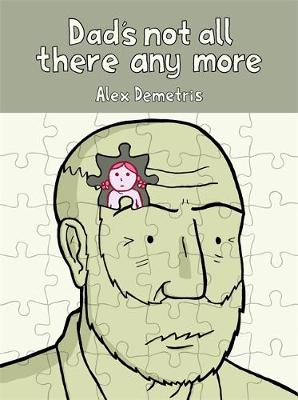 Dad's Not All There Any More: A comic about dementia

Description for Dad's Not All There Any More: A comic about dementia Paperback. When Pete started hallucinating clowns in the corner his son knew something wasn't quite right. Here, Alex Demetris draws on his father's experience of Lewy Body Dementia (LBD) to shed light on the condition. Exploring both physical and mental changes, this comic shows how LBD symptoms affect people with the condition and their loved ones. Num Pages: 32 pages, Illustrated throughout. BIC Classification: FXZ; MJND; VFJB. Category: (G) General (US: Trade). Dimension: 173 x 230 x 19. Weight in Grams: 106.
Louie what? John's dad, Pete, was already diagnosed with Parkinson's disease when he began to have some very strange experiences, not least of which was the little red-haired girl who followed him around the house. Eventually diagnosed with Lewy Body Dementia (LBD), his hallucinations and other symptoms became more frequent and intense, and Pete moved into a care home. Based on his family's experience of his father's LBD, Alex Demetris' comic explores with tenderness and humour one of the most common yet often unheard of types of dementia; what it is, its symptoms, ... Read moreliving in a care home and the impact on people living with the condition and their families. Show Less

About Demetris, Alex
Alex Demetris is an illustrator, cartoonist and maker of comics. He completed an MA in Illustration at Camberwell College of the Arts in 2012, which resulted in a comic based on his family's experience of coping with his father's dementia. Alex co-authored Grandma's Box of Memories: Helping Grandma to Remember (ISBN 9781849055178), also published by JKP. He lives in London, ... Read moreUK. Show Less

Reviews for Dad's Not All There Any More: A comic about dementia
Relating the author's experience of watching his own father's struggles with dementia, this book gives fresh insight into the condition and the impact it can have on the sufferer and those around them. A frank and rather heartbreaking real tale of illness beautifully handled.
gosh! authority,blog Dec 2015 Alex Demetris' comic is bound to raise awareness of this common ... Read moreform of dementia, Lewy Body Dementia, which is not as widely known as it should be. I'm a doctor, and I learnt things from this comic because it is, in fact, an ideal way to learn - the reader is introduced to an individual, a family, rather than a disease or condition. I felt like I had been introduced to Demetris' family and tagged along on a visit to the nursing home in which 'Dad' (Peter) now resides. The author adds enough factual material to inform without overloading or losing the reader. The gentle, ironic humour and gorgeous muted colour scheme make for an enjoyable read, despite the serious subject matter.
Ian Williams, Graphic Medicine Show Less

Goodreads reviews for Dad's Not All There Any More: A comic about dementia