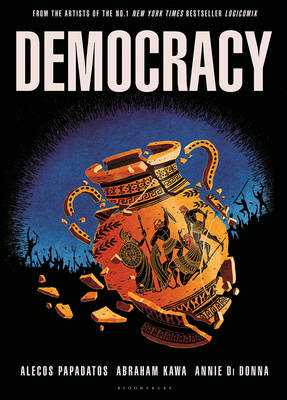 Description for DEMOCRACY Paperback. Num Pages: 240 pages, Colour. BIC Classification: FXZ; JPHV. Category: (G) General (US: Trade). Dimension: 173 x 237 x 17. Weight in Grams: 608.
It is 490BC and Athens is at war. Leander, trying to rouse his comrades for the morrow's battle against a far mightier enemy, begins to recount the story of his own life. Having witnessed the evils of the old tyrannical regimes and the rise of a new political system, Leander tells a tale of danger, bravery and big ideas, of the death of gods and the tortuous birth of democracy. Through a series of breathtaking scenes, we see that democracy was forged from chance and historical contingency - but also through the cunning and courage of a group of highly ... Read moretalented, driven individuals. Alecos Papadatos and Annie Di Donna, artists behind the international phenomenon Logicomix, together with writer Abraham Kawa deliver a graphic novel bursting with extraordinary characters and vibrant colour, one that offers fresh insight into how this greatest of civic inventions came to be. Show Less

About Papadatos, Alecos, Kawa, Abraham, Donna, Annie Di
Alecos Papadatos worked as an animator, animation director and storyboarder for major European animation production companies from 1984 to 1994. In 1990, his love for drawing led him to the print media and he now writes and draws comics for two Greek newspapers. He spent 2003 to 2008 drawing the graphic novel Logicomix, which went on to become an international ... Read morephenomenon. He lives with his family in Athens. Abraham Kawa teaches Cultural Studies at the University of the Aegean and focuses on graphic novels and genre fiction. He also writes paranormal mystery and horror novels and, in his academic capacity, he is the author of Virtual Gazes: Postmodern Narrative in Comic Books, Cinema and Literature, and a contributor to books including The Routledge Companion to Science Fiction. Annie Di Donna has been an animator on many international productions. She works as an art director and colourist for graphic novels. Show Less

Reviews for DEMOCRACY
Impressive ... Simultaneously a standout historical examination and a compelling story
Booklist
It's fun, it's heartbreaking, it's thought-provoking, and it's tragic - and it's absolutely one of the greatest graphic novels I expect to read all year
i09
A colorful love letter to Greek history
Kirkus
Probably the best and certainly the most extraordinary ... Read moregraphic novel I have ever come across
Bryan Appleyard, Sunday Times on LOGICOMIX
Logicomix is highly original, a rich and enthralling encounter with myth, maths, theatre and the giants of twentieth-century philosophy
Posy Simmonds on LOGICOMIX
An extraordinary piece of work... Its great subject is the historical desire to make the world totally understandable by reason, and it itches us inside the debate
John Walsh, Independent on LOGICOMIX
Show Less