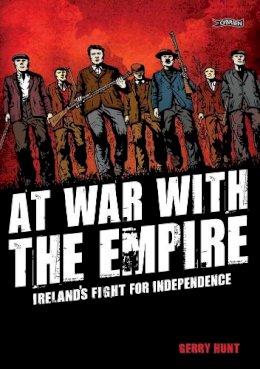 At War with the Empire: Ireland's Fight for Independence

Reviews for At War with the Empire: Ireland's Fight for Independence
I've no idea why I haven't blogged about Gerry Hunts historical graphic novels before. We've had Blood Upon The Rose, the story of Easter 1916, since it was published in 2009. That was such a success that when At War With The Empire, the follow up came out, I ordered it straightaway. It was a no-brainer - my eldest son ... Read moreloved graphic novels and flew through them. And these books explained (in colourful detail) Irish history that he needed to know about, for school and for life. This latest one, 1913 Larkin's Labour War which I found in the library last week is his favourite of the lot
onthestripeycouchonasaturdaymorning.blogspot.ie makes history thoroughly accessible to readers of all ages ... highly recommended
Midwest Book Review bringing history to life better than any history book could hope. Accessible, informative and insightful ... will appeal to both children and adults
Primary Times a perfect way of introducing a younger person to Irish history ... adults would enjoy it as well ... very interesting
Talking History on Newstalk 'gets children into Irish history but through the graphic novel ... a super idea ... a personal favourite'
Ryan Tubridy will resonate with many young people, boys especially, who are fascinated with this period of history and particularly the persona of Michael Collins ... essential stock for any school library ... does succeed in providing an exciting introduction to its subject matter
Inis Magazine 'visually the book works very well, the style of the illustrations capturing the mood of the story'
Inis Magazine having achieved critical acclaim for his graphic account of the Easter Rising, Blood upon the Rose, Gerry Hunt has now turned to the next page in this country's history. A vividly-presented, engaging account ... will attract younger readers despite its disturbing contact ... a style that will appeal to young readers ... Ireland's War of Independence as you've never seen it before
Evening Echo The scenes and dialogue ... are masterly. Brilliantly conveying movement and violence ... will appeal to the younger generation ... but it is still a serious history of the war of independence
Books Ireland as a light introduction to these characters in an educational sense, this book is quite useful. Clever use of colour ... very good ... a resource ... to make that history more accessible than the really boring text books
Comic Cast The artwork here possesses an accuracy, especially in characters, that is good, while the detail to the historical aspects is incredible. The War itself is a terribly dark part of British history where honour and morals are set to one side in a desperate
forbiddenplanet.co.uk some of the images ... are strong enough to work as stand-alone illustrations ... like its predecessor, this will serve as a useful introduction to the subject for second-level students
Sunday Times even the most pop-culture-literate teenagers should prefer Hunt's approach to the reams of dates and names typically found in school books ... old-fashioned quality will appeal to fans of war comics
Sunday Times 'moves along at a deceptively fast pace and a strong narrative emerges from the force and vividness of its determinedly old-fashioned drawings'
Sunday Times books like this belong in every school and library in Ireland to teach us very important aspects of our recent historical past ... a winner on every level ... hats off to O'Brien Press and Gerry Hunt for another winner
Irish Comic News provides an accessible, informative read for adults as well as young people ... a useful addition to the history classroom ... sticks close to historical events
CBI's Recommended Reads 2012 The War of Independence as you've never seen it before. Vivid and detailed ... expect a sequel
RTE Guide Show Less

Goodreads reviews for At War with the Empire: Ireland's Fight for Independence