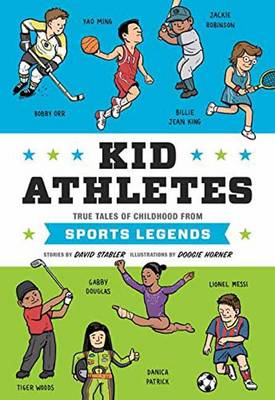 Description for Kid Athletes Hardcover. 18 true tales of childhood from the world's greatest athletes for readers ages 8-12. Num Pages: 216 pages, Illustrations throughout. BIC Classification: 5AJ; YNW. Category: (J) Children / Juvenile. Dimension: 203 x 140. Weight in Grams: 567.
With all the best elements of Kid Presidents--colourful illustrations, kid-relatable subjects, true tales of overcoming adversity. -Kid Athletes tells true tales from the childhoods of a wide range of athletes. Did you know...Babe Ruth was so incorrigible he was sent to reform school at the age of seven. Historians now think the Babe may have suffered from attention deficit disorder, which contributed to his wild, hyperactive nature--and may have helped him develop his almost supernatural ability to hit a baseball. Mia Hamm was born with a club foot. She underwent multiple surgeries, had to wear special casts and corrective ... Read moreshoes until she was a toddler. She overcame her disability to become the most prolific goal scorer in the history of soccer. Muhammad Ali (aka Cassius Clay) learned how to fight after a thief stole his bicycle when he was twelve. When little Cassius vowed to whup the kid who'd swiped his wheels, a kindly police officer offered to give him boxing lessons. And a heavyweight legend was born. The lineup of potential subjects is exciting and diverse: female athletes like the Williams sisters, Jackie Joyner-Kersee, and Babe Didrikson Zaharias; African-American legends like Jackie Robinson and Michael Jordan; international stars like Yao Ming and Cristiano Ronaldo; and Native American icons like Jim Thorpe. With Doogie Horner's whimsical illustrations bringing every goal, touchdown, and championship to life, this book is a slam dunk for young readers. Show Less

About Stabler, David; Horner, Doogie
The author of Kid Presidents (Quirk, 2014), David Stabler is the kid-friendly alter ego of Robert Schnakenberg, a Senior Copywriter at Random House. Schnakenberg has written several books of pop history including Secret Lives of Great Authors (Quirk, 2007), Secret Lives of the Supreme Court (Quirk, 2008) and Distory: A Treasury of Historical Insults. His work has also appeared in ... Read moreThe American Writer, and Real People; and online at Alternet, HoleCity, Mental Floss, and PopPolitics.com. He has been a major contributor to numerous multi-volume reference works, including The St. James Encyclopedia of Popular Culture; Fashion, Fad, and Style; and Bowling, Beatniks, and Bell Bottoms: Pop Culture of 20th Century America. Doogie Horner is a writer, illustrator, and stand-up comedian. His books include Kid Presidents (Quirk, 2014), 100 Ghosts (Quirk, 2013) and EVERYTHING EXPLAINED THROUGH FLOWCHARTS (HarperCollins, 2011). Show Less

Reviews for Kid Athletes
Outstanding...Inspiring and entertaining, Kid Athletes isn't just for sports fans.
Booklist, starred review Even if you don't exactly love sports, this book only says a little bit about them in the actual sport, so go out and get this book because it will teach you a lot and you will enjoy it immensely.
Kidsday reporters, Newsday ... Read more Perfect for the adolescent set, these inspiring stories mix fun and non-fiction.
Geeks of Doom Praise for Kid Presidents: Just like history class, only hilarious.
Tim Federle, author of Better Nate Than Ever With cartoonish illustrations that will attract fans of Jeff Kinney's The Diary of a Wimpy Kid and Rachel Ren e Russell's The Dork Diaries, this informative offering leaves no presidential childhood rock unturned.
School Library Journal Caricatures by Horner are whimsical and funny, a good match for a book that demonstrates that every president started life as a goofy, regular kid.
Booklist Praise for Kid Authors: Lively glimpses of formative moments and budding talents.
Kirkus Reviews A fun and useful addition, especially for aspiring writers and class projects.
School Library Journal, Paige Rowse, Needham High School, MA This is an ideal gift for aspiring young writers who may need proof that even the most famous authors had to start somewhere.
Shelf Awareness for Readers [Kid Authors] was full of real information, but the author made it fun and funny ... I would recommend this book for all people who read books and want to know interesting information about authors, and also for people who want to be authors themselves.
Michael, age 9 Praise for Kid Artists: Impressively diverse. -Booklist For budding artists, here's a heartening reminder that 17 unconventional greats
not to mention all the rest
started out as children too.
Kirkus Reviews Memorably weird childhood moments
Jackson Pollock accidentally had part of a finger chopped off and then eaten by a rooster
are likely to stick with readers, as will Horner's impish cartoons. -Publishers Weekly Show Less