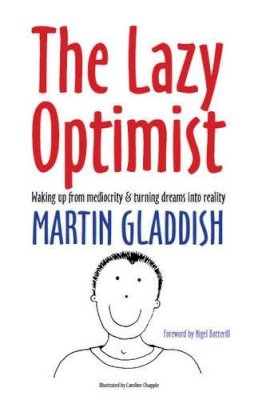 Description for The Lazy Optimist Paperback.
You know that thing you've always wanted to do? Twenty-one came and went and although the dream was still there (floating, less bright but still alive, somewhere behind a stack of stress and hidden amidst a sea of overtime hours in a distant corner of his mind) Charlie barely noticed that his dreamline-deadline had ticked its final tock. Well maybe it isn't too late after all! You see Charlie believed that he was going to be successful. He believed that he was special and that one day he would rise above the mass of mediocrity which surrounded ... Read morehim, dragged him down and slowly drained him of his ambition; and then he would make a name for himself. The Lazy Optimist tells the story of an everyday man who had been harbouring the embers of potential in his heart for far too long. It is a tale of hope and describes how he managed to escape his life of genuine optimism, held back by fear, cunningly disguised as bad luck and resulting in a kind of directionless, busy-laziness...And if Charlie can... Show Less

About Gladdish, Martin
Martin Gladdish was born in Grantham, Lincolnshire but grew up in Tadley (a small town near Basingstoke) before moving to Hemel Hempstead where he lives with his wife Emma. He is a freelance copywriter and business coach; working with some of the UK's leading entrepreneurs to teach, mentor and support small businesses in implementing successful marketing and growth strategies. Martin ... Read moreis a full-time Christian (meaning that his 'time' on this planet is 'full' because of Jesus Christ) and he is always willing to stop whatever he is doing to share the good news from the best book he has ever read. All you need to do is ask. You might wish you hadn't; but you absolutely should and it might just change your life too... Show Less

Reviews for The Lazy Optimist

Goodreads reviews for The Lazy Optimist