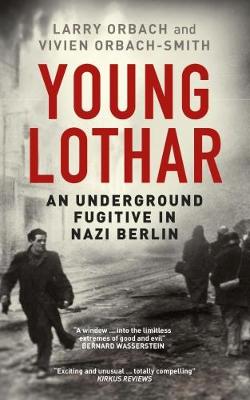 Description for Young Lothar: An Underground Fugitive in Nazi Berlin Paperback. Lothar Orbach, the youngest son of a German Jewish family, was just 14 when the Nazis began rounding up Berlin's Jews. Num Pages: 384 pages. BIC Classification: 1DFG; 3JJH; BTP; HBJD; HBTZ1; HBWQ. Category: (UP) Postgraduate, Research & Scholarly. Dimension: 216 x 127 x 25. .
His promising education was aborted; his close-knit family splintered. When the Gestapo came for Orbach's mother on Christmas Eve 1942, they escaped with false papers; his mother found sanctuary with a family of Communists and Orbach - under the assumed identity of Gerhard Peters - entered Berlin's underworld of 'divers'. He scraped a living by hustling pool, cheating in poker and stealing - fighting, literally, to stay alive. Outwardly he became a cagey amoral street thug, inwardly he was a sensitive, romantic boy, devoted son and increasingly religious Jew, clinging to his humanity. In the end, he was betrayed and ... Read moresent to Auschwitz, on the last transport, in 1944. This singular coming of age story of life in the Berlin underground during WWII is, in essence, a story of hope, even happiness, in the very heart of darkness. Show Less

About Larry Orbach
Larry (Lothar) Orbach (1924-2008) grew up in Berlin and assumed the identity of Gerhard Peters from 1942-44. He spent the last year of the war in Auschwitz and emigrated to New York in 1946. Settling in New Jersey, Larry Orbach set up a jewellery business and, with his wife Ruth Geier - also a refugee from Nazi Berlin - they ... Read morehad two children, Vivien and Richard. True to his word, Larry Orbach's mother, Nelly, lived with him and his family until her death at age 83 in 1969. Larry's final years in his beloved New York were full and surrounded by friends from all walks of life. VIVIEN ORBACH-SMITH, Larry's daughter, is an adjunct associate professor of journalism at New York University. A native of New Jersey, she earned her own B.A. and M.A. degrees from NYU and began her career there as a development writer. Today she works as a freelance writer, book-editor and college-essay coach. An eloquent voice of the Second Generation, she has addressed many audiences on inherited trauma and on diversity, democracy and social-justice issues. She taught classes on the Holocaust to teenagers in synagogue religiousschools for many years. Vivien lives with her husband in Fairfield County, Connecticut. They have three grown children and three little grandchildren. Show Less

Reviews for Young Lothar: An Underground Fugitive in Nazi Berlin
This is a book to make one both smile and weep, to admire the generosity of spirit of courageous individuals and to despair of the selfish inhumanity of those who passed by on the other side. Larry Orbach's story of survival against impossible odds opens a window into the seamy underworld of wartime Berlin and into the limitless extremes of ... Read moregood and evil of which our species is capable. - Bernard Wasserstein, author of On the Eve: The Jews of Europe before the Second World, An exciting and unusual mixture of Holocaust journal, coming-of-age story, and memoir of life on the seedy underside of Berlin during World War II ... this is totally compelling, and one of the rarer stories of the Holocaust. - Kirkus Reviews Show Less