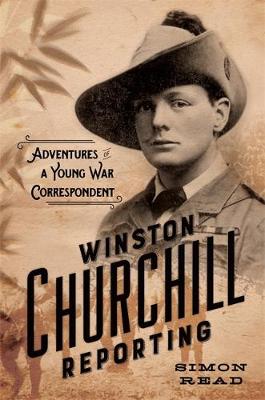 Description for Winston Churchill Reporting: Adventures of a Young War Correspondent Hardcover. Combat, cigars, and whiskey--from the jungles of Cuba and the mountains of the Northwest Frontier, to the banks of the Nile and the plains of South Africa, comes this action-packed tale of Winston Churchill's adventures as a war correspondent in the Age of Empire. Num Pages: 328 pages, 8 pages black-&-white photographs. BIC Classification: 1DBK; 3JH; 3JJ; BGH; HBJD1; HBWM; JPHL. Category: (G) General (US: Trade). Dimension: 238 x 165 x 38. Weight in Grams: 520.
Long before his finest hour as Britain's wartime leader, Winston Churchill emerged on the world stage as a brazen foreign correspondent, covering wars of empire in Cuba, India, the Sudan, and South Africa.In those far-flung corners of the world, reporting from the front lines between 1895 and 1900, Churchill mastered his celebrated command of language and formed strong opinions about war. He thought little of his own personal safety, so convinced was he of his destiny, jumping at any chance to be where bullets flew and canons roared. I have faith in my star- that I am intended to ... Read moredo something in the world, he wrote to his mother at the age of twenty-three before heading into battle.Based on his private letters and war reportage, Winston Churchill Reporting intertwines young Winston's daring exploits in combat, adventures in distant corners of the globe, and rise as a major literary talent- experiences that shaped the world leader he was to become. Show Less

About Simon Read
Simon Read is an award-winning former newspaper reporter and the author of seven previous works of narrative non-fiction published on both sides of the Atlantic, including War of Words, The Case That Foiled Fabian, and Human Game. His writing has appeared in the San Francisco Chronicle Review of Books and Publishers Weekly. He lives in Northern California.