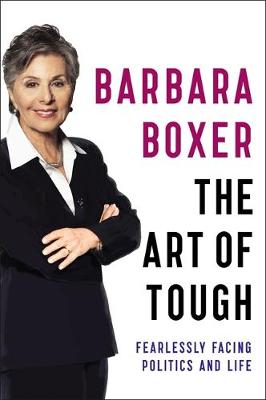 The Art of Tough: Fearlessly Facing Politics and Life

Description for The Art of Tough: Fearlessly Facing Politics and Life Hardcover. Num Pages: 288 pages, 1x 8pp photo insert. BIC Classification: 1KBB; 3JJP; 3JM; BGHA; HBJK; HBLW3; HBLX; JPHL. Category: (G) General (US: Trade). Dimension: 164 x 327 x 29. Weight in Grams: 506.
After serving in Congress for more than thirty years as both a congresswoman and a senator, Senator Boxer has proven herself to be a passionate advocate for significant issues of our time, including the military, civil rights, universal health care, and the environment. With a who's who of politics of the past three decades, Boxer shows all of the machinations that it takes to make government work, much of it off the record. Featuring names beloved and reviled, Boxer takes us behind the scenes to show us what it has been like to deal with George W. Bush, John McCain, ... Read moreand Mitch McConnell, as well as Tip O'Neill, the Clintons, Obama, and so many more. Raised in a Jewish, working-class neighborhood in Brooklyn, NY, Boxer was a journalist who decided she could make a difference and ran for local office in California, inspired to fight tooth and nail to help bring that American dream of a more perfect union, into fruition. Behind closed doors in secret negotiating rooms, Boxer has seen it all: petty squabbling, bare-knuckled dysfunctional debate, and vicious character assassinations. Drawing back the curtain, Boxer leads readers in a master class in statecraft, revealing the truth behind controversial policies, temperamental elected officials, and sensational media headlines that have dominated our national discourse. In this passionate, heartfelt testament to one woman's life's work to improve democracy for all, Senator Boxer offers her views on how American government is flawed and can be rescued to ultimately flourish, but only with the full participation of the nation at large. Show Less

About Barbara Boxer
Barbara Levy Boxer is the junior United States Senator from California, serving since 1993. A lifelong Democrat, she previously served in the House of Representatives for ten years, from 1983 to 1993. Married for more than fifty years, she lives in California, where she raised two children and has four grandchildren.

Reviews for The Art of Tough: Fearlessly Facing Politics and Life
This book offers invaluable lessons about politics and life from one of the strongest progressive voices of the U.S. Senate. Barbara Boxer's life lessons are tried and true. They are pearls of wisdom her readers can live by.
Rep. John Lewis (D-Georgia) Drawing on her decades of effective, principled advocacy of liberal ideals, Barbara Boxer provides a valuable description ... Read moreof how the legislative process works at its best. She weaves the political, official, and personal aspects of the job into a readable, instructive narrative of how democracy can be practiced.
Former Congressman Barney Frank (D-Massachusetts) It takes a true warrior to fight against the biggest polluters who would degrade our environment. That warrior is Barbara Boxer, who has been my partner for years in protecting our oceans so that their beauty remains for future generations.
Ted Danson, actor and environmentalist When you read Barbara's words, you realize how important it is to be strong in the face of overwhelming powers. Her book will inspire all of us to be fearless in our pursuits, our convictions, and our lives.
Lily Tomlin, comedian and actress From being told in the early sixties that 'women aren't stockbrokers' to five terms in the House and four terms in the Senate, Senator Barbara Boxer's memoir is the story of a woman who found her calling. My favorite quote is: 'So I ran.' Even if you differ with Senator Boxer politically, The Art Of Tough educates and entertains. It's a 'must read.'
Carole King, singer-songwriter and bestselling author It's a great book about female empowerment and what it takes to be a member of society and how one person can make a difference.
Chelsea Handler In more than 40 years in government, Barbara Boxer has truly mastered the 'Art of Tough.' Her life and work are an inspiration to politicians everywhere, both real and completely fake.
Julia Louis-Dreyfus, actress and star of the HBO series Veep For decades I have worked with Barbara Boxer on issues that have touched our hearts and our lives. She is a woman of her word and she is one of the most generous leaders I have ever met in politics.
Nancy Pelosi, 52nd Speaker of the U.S. House of Representatives (D-California) Anyone who thinks that Washington can't be understood, has no great hearts, and is not crucial to our daily lives will be turned around on all counts by Barbara Boxer's irresistible story of her more than four decades there. Read this as a bridge into the coming political year, and you won't just vote, you'll fight to vote.
Gloria Steinem, feminist, activist, and author [Boxer has] an eye for a good anecdote.... a key record of her work.
Publishers Weekly Show Less

Goodreads reviews for The Art of Tough: Fearlessly Facing Politics and Life